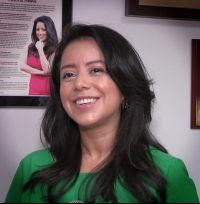 Victoria regularly mentors students and believes that investment in education is one of the most critical issues facing our state. Her priorities are advocating for working families, women, small businesses, and Veterans.

Victoria grew up in the barrio in Pleasant Grove in Dallas and comes from a working class family. Her parents emphasized the importance of education and having compassion for others. The daughter of a father with a sixth grade education who had a small TV and VCR repair shop off of Galloway and Town East in Mesquite, Victoria became the first in her family to graduate from college earning her degree in Government and Politics from The University of Texas at Dallas and then graduating magna cum laude in the top 3% of her law school class at Texas Southern University Thurgood Marshall School of Law. Victoria began her legal career as an Attorney in the Complex Commercial Litigation group at Weil, Gotshal & Manges, LLP, one of the top ten law firms in the country.

Victoria runs her own law firm, where she represents individuals and businesses in civil litigation and employment law.