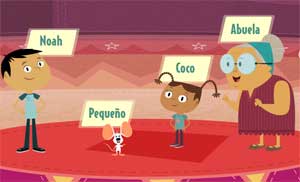 To celebrate Hispanic Heritage Month, Oh Noah!, the fun and funny web series introducing kids to Spanish, will make its broadcast debut in interstitials in episodes of the popular PBS KIDS math series Cyberchase. Kids can catch Noah and his comic misadventures at the end of Cyberchase episodes beginning next Monday, September 17 on PBS KIDS (check local listings for Cyberchase).

The debut of Oh Noah! coincides with the kick-off of a year-long celebration beginning the week of September 17-23 in honor of the 50thanniversary of THIRTEEN, New York’s public media provider.

Designed to provide children ages 6 to 8 with an engaging introduction to Spanish, the Imagen Award-winning Oh Noah! stars nine-year-old Noah, who is staying with his grandmother in a community where everyone speaks Spanish. A series of misunderstandings launch comic misadventures as he tries to communicate with others who don’t speak English. The bilingual dialogue in Oh Noah! introduces Spanish to English speakers and also offers English language learning support to Spanish speakers. To extend and reinforce Spanish vocabulary learning, the Oh Noah! Web site features games embedded in the short videos and additional web adventures.