Update| NBA TO PAY TRIBUTE TO ITS LATIN HERITAGE 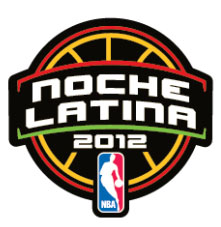 “The Noche Latina program is the perfect example of the ongoing commitment by the NBA to celebrate diversity as part of the fabric of our game,” said NBA Vice President of Hispanic Marketing Saskia Sorrosa. “This month-long celebration will bring the excitement of the NBA to Hispanic fans in ways that are culturally relevant.”

To further honor Hispanic fans and players during Noche Latina games, participating teams will host in-arena Latin-themed activities, including music, performances, and giveaways. As the league’s marquee program under the éne•bé•a platform, Noche Latina events will also be supported with television and radio advertising on both English- and Spanish-language media across the country as well as on the league’s Spanish-language Web site, enebea.com, and social media pages.

Noche Latina merchandise, including the special game jerseys produced by adidas, will be available at the NBA Store on Fifth Avenue in New York City, online at NBAStore.com, and at in-arena stores for participating teams.

Noche Latina launched during the 2006-07 NBA season and, features uniforms that display the team name as spoken by the bicultural, bilingual Latino population and Spanish-language TV and radio announcers, according to market research. The Miami Heat, for example, is “El Heat”; the San Antonio Spurs are referred to as “Los Spurs.”