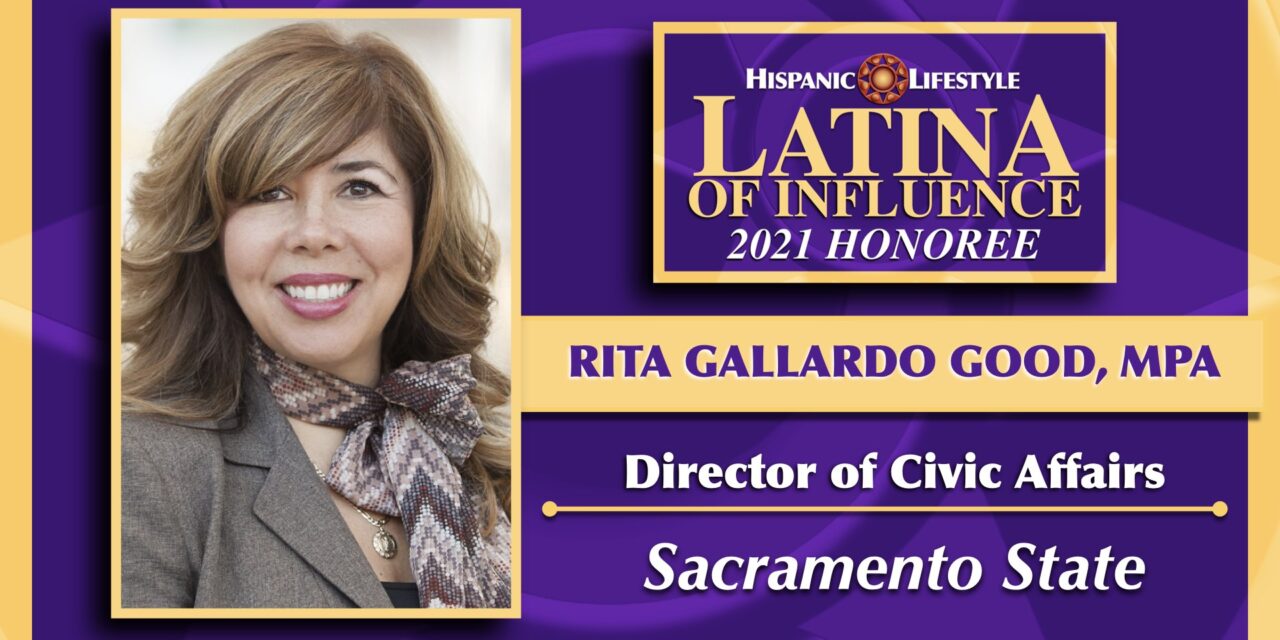 Hispanic Lifestyle is pleased to recognize Rita Gallardo Good the Director of Civic Affairs for Sacramento State in the Office of Public Affairs and Advocacy as a 2021 Latina of Influence. She previously served as the Assistant Director of Member Account Services for the California State Teachers’ Retirement System, overseeing employer relations with public school agencies throughout the State of California. Formally, she was the Division Chief of Stakeholder Relations for CalPERS, overseeing the outreach efforts to all retiree groups, members, and associations through meetings, briefings, and consistent communications. She also oversaw the Ambassadors Program, Public Record Act requests for the entire CalPERS enterprise, and the Strategic Event Management Team. Prior to joining CalPERS, Rita worked for Senator Alex Padilla in his Capitol office as a legislative consultant for several years, successfully working on legislation affecting higher education, local governments, and governmental organization. She previously served as the Chief Assistant Clerk of the Council for the City of Santa Ana and the Assistant City Administrator for the City of Hawaiian Gardens.

Rita has been a proud public servant for over 26 years in local and state government. A transition in 2010, brought her to Sacramento. Her goal in her present position as Director of Civic Affairs is to create and support local and regional partnerships for Sacramento State. She works to bridge the gap between Sacramento State and local public agencies, non-profits groups, community-based organizations, and chambers of commerce through developing, fostering and maintaining mutually beneficial relationships through communication, engagement, and outreach on the impact of the University in the region.

As a passionate public servant, Rita serves as the Chair of the City of Sacramento’s Parks and Community Enrichment Commission, and the first Latina to serve in that position in the 18-year history of the commission. She was recently appointed as a Board Member for the Sacramento Hispanic Chamber of Commerce. Rita also serves as the Standby Trustee to the Los Rios Community College District for Area 5, appointed in 2020; Mentor for PUENTE at Sac City Community College since 2012; Vice President of Fundraising and Board Member to the Chicano Latino Youth Leadership Project (CLYLP) since 2011; Member of the City of Sacramento’s Stadium Area Public Financing Authority for the proposed MLS Stadium; and Member of the Advisory Council for Nueva Epoca Latinx Leadership Program.

Rita earned her Masters of Public Administration at the University of Laverne as well as her Bachelors of Business Administration, and is an alumnus of Los Angeles Harbor Community College. She previously served as a Commissioner for the County of Sacramento Equal Opportunity Advisory Committee, appointed by Supervisor Kennedy. Also, Rita served as a Governor’s appointee to the Statewide Pupil Assessment Review Panel under the Department of Education for two terms.
Rita makes her home in Sacramento, with her husband Ross. She has three adult children, and is a proud grandmother to Layla Flor and Levi Jayce. She is committed to mentor and inspire communities of color to flourish and grow by working towards their dreams of success in education, appointed or elected office, and career. Rita takes great pride as she works to make a difference in the lives of others.