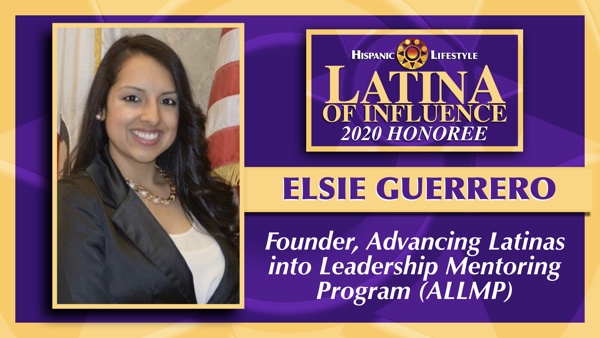 Hispanic Lifestyle is pleased to recognize the founder and organizer of Advancing Latinas into Leadership Mentoring Program (ALLMP), Elsie Guerrero as a 2020 Latina of Influence. Ms. Guerrero along with our entire list of 2020 Latinas of Influence are invited to participate in Latina Conference taking place June 2, 2020 in Ontario, California.

Elsie Guerrero is the founder and organizer of Advancing Latinas into Leadership Mentoring Program (ALLMP), a non-profit that helps high school Latinas prepare for their lives after high school professionally and academically through mentorship, college preparedness, and professional development. Through ALLMP, she has mentor young Latinas in different high schools and awarded five high school students a book scholarship for their first semester of college. Elsie also established an ALLMP network platform for professional Latinas on LinkedIn and Facebook to connect women with common interests and help empower each other and the next generation of Latinas.

Elsie is also a publisher and children’s book author of Elsie Publishing Company, LLC. She writes children’s books on social issues, such as children with disabilities and the Latino community to bring awareness about the topic and promote inclusion. In four years, she published twelve books and plans to publish more in the near future to eliminate discrimination, bullying, and any misconception society may have about children who have a disability and/or the Latino community. The majority of the books were inspired by real children and real-life situations. She partnered with Assemblymember Cristina Garcia to publish Bringing Back History: The Untold Story about the Mexican Repartition, a story based on AB 146 and the students of Bell Gardens Elementary School.

She had two book tours and have read to children all over the United States. Some of the places she hosted her book tour are California, Texas, Kentucky and Washington, D.C.  As much profits as possible from the profits of the books, Elsie gives to scholarships for Latinos and disabled youth. One hundred percent of the profits from her children’s book, Puerto Rico: Its own Land, goes towards building playgrounds in Puerto Rico. She has been featured on Telemundo, NBC Latino, and Newsweek Mexico. Elsie was also featured in the international movement, Today’s Inspired Latinas. Her best-selling book is How Emily and Eli Became Friends, a story about autism.

Elsie also does advocacy efforts in helping undocumented families learn about their rights under the federal law, the Individuals with Disabilities Education Act (IDEA). She helps families learn about the rights they have as a parent with a child who has a disability to ensure that their children are getting the free and appropriate education and related services that they are entitled to.

Elsie is a member of the California Women Lead, Latinas Lead California, California State Society, Lideres DC, and Pi Alpha Alpha Honor Society. She serves as a board member for the DC Latino Caucus. She was also a trainee for the New American Leaders “Ready to Lead” program. She earned her bachelor’s degree in Government (Political Science) with minors in Philosophy and Sociology from Sacramento State University. She also obtained a Master of Public Administration with a concentration in Judicial Affairs from Golden State University and a Master of Public Affairs and Practical Politics from the University of San Francisco. In her free time, Elsie does charity races, yoga, and dance.