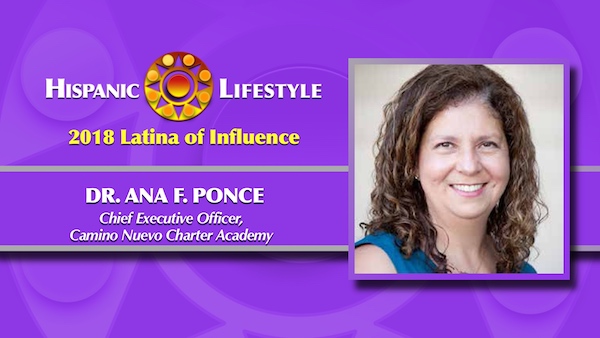 Dr. Ana F. Ponce is the chief executive officer of Camino Nuevo Charter Academy, a network of six charter schools and an early education center serving more than 3,600 students in central Los Angeles. Under her leadership, Camino Nuevo schools have won state and national awards for improving outcomes for low-income students and English learners. Her accomplishments prompted Forbes Magazine in 2011 to name her one of the top seven most powerful educators in the world.

Ana is the youngest daughter of Mexican immigrants and the first in her family to graduate college. She earned a full scholarship to Middlebury College in Vermont, a world away from Pico Union, the neighborhood where she grew up. Her first teaching job was a Teach for America assignment at a public school in South L.A. After three years in the classroom, she landed a fellowship at Columbia University’s Teachers College in New York, where she earned a master’s degree in bilingual education.

Determined to close the achievement and opportunity gaps for low-income minority students, she returned to Los Angeles and helped open the first independent charter school in South L.A., where she taught for seven years before joining Camino Nuevo in 2001. At Camino Nuevo, she found herself working with families in the neighborhood where she grew up, investing them and their children in being College Ready, College Bound.

Since then, Ana has been instrumental in driving the success of the organization and championing high quality educational opportunities for kids. She has demonstrated that schools comprised almost entirely of English learners, in some of the city’s poorest and densest neighborhoods, can achieve extraordinary results and serve as models of excellence. At Camino Nuevo, 99 percent of seniors graduate and 70 percent of them earn admission to a four-year  college.

Ana says, by having a concentrating effort in the MacArthur Park area we begun shifting the ecology to where higher education becomes part of the rhetoric, where dropping out of high school is not accepted. The more kids we graduate, the more kids we send off to college, the more other kids start to see themselves in them.”

Camino Nuevo schools stand out for providing a full range of student and family support services and delivering an education tailored to the specific needs and demands of the neighborhoods they serve. Students have access to college-preparatory classes and afterschool programs including art, music, and dance. Families also have the option to enroll their children in a bilingual program. In 2015, Camino Nuevo earned the Bright Spot Award from the White House Initiative on Educational Excellence for Hispanics for closing achievement gaps between English learners and native English speakers.

Ana holds a second master’s degree from the University of California, Los Angeles and a doctorate in educational leadership from Loyola Marymount University. A veteran of the charter schools movement in California, she serves on several boards and committees, including the Board of the California Charter Schools Association, the Educators of Color (EdLoc) Leadership Committee, and the L.A. County Commission on Local Government Services.

Named by Forbes Magazine in 2011 one of the top seven most powerful educators in the world, Dr. Ana Ponce is a Latina of Influence. A true example and role model for Latinas in the U.S., Dr. Ponce has dedicated the past 27 years in addressing the education inequities affecting many Latino students. Under her leadership, Camino Nuevo Charter schools have won state and national awards for improving outcomes for low-income students and English learners.

A daughter of Mexican immigrants and the first in her family to graduate college, Dr. Ponce is a dedicated community leader who also serves on several boards and committees, including the Board of the California Charter Schools Association, the Educators of Color (EdLoc) Leadership Committee, and the L.A. County Commission on Local Government Services.