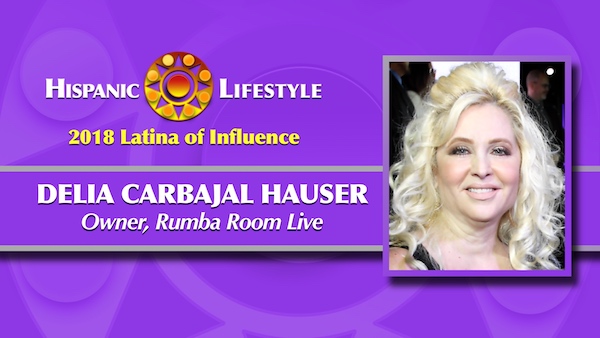 Growing up with her maternal grandmother in her birth city of El Monte, California, Delia Hauser learned what it meant to have Mexican blood running through her veins. Thanks to her grandmother Carmen, a native of Guanajuato, Mexico, Delia learned the language of one of the greatest Spanish writers, Miguel Cervantes, and developed the love for music of one of the most important entertainer representatives South of the border, Vicente Fernández. But it was the beautiful and exquisite ranchero traditions she fell in love with what made her become an escaramuza, or horsewoman.

She would perform every Sunday at the now legendary Pico Rivera Sports Arena in Pico Rivera, California, with Carmen present front row as her number one fan. “She would never miss a performance”, remembers Delia, whose mother was a Superior Court assistant and, whose father owned an ink manufacturer.

It was during one of those usual Sunday performances that she locked eyes with a charismatic and hardworking parking attendant by the name of Ralph Hauser III, and her world was changed forever. Though Mexican-American Ralph thought blue-eyed Delia only spoke Spanish – a language he did not know – he built up the courage to introduce himself to the ex beauty queen, whose perfect English made communication easy. They were inseparable since then. “Meeting my husband was truly a fairytale”, says Delia. “We knew we were going to be together for a very long time”.

The young couple married full of hopes and dreams less than two years after their first meeting. They became a team whose hard work

led them to take over management to run the entertainment venue where they met, merely six months after their wedding. Delia became Ralph’s Spanish teacher, and he in return, taught her the basics of running a business.

As any young couple, Delia and Ralph were struggling to make ends meet and faced the financial hardships of owning a not so lucrative business, when they found out they were expecting their first child. Wanting to provide the basic needs of a newborn, Delia came up with the idea to sell agua de horchata (a rice water drink). She would make the drink from scratch and personally sell it from a booth she had set up at the venue, during every charreada (a type of rodeo) in Pico Rivera Sports Arena. Her idea was such a success that she not only was able to buy the crib she so desired for her baby, but earned the title of entrepreneur. “That was my first little business”, says Delia with a proud smile.

With the welcoming of their first-born and the rapid success of Pico Rivera Sports Arena, she left the horchata business behind and became a full time mother, quickly tending to a total of six children. She never imagined that destiny would force her to resume her role as a business woman many years later.

In February 2003, Ralph Hauser III was at the peak of his career as one of the most powerful concert promoters in the United States Latin market, managing superstars like Vicente Fernández, Antonio Aguilar, Juan Gabriel, Joan Sebastian, Ana Gabriel and Alejandro Fernández, among others, with a multi-million dollar empire, when he collapsed from a heart attack during a morning exercise routine. He was only 41 years old.

Delia was devastated. Her world crumbled. She now had to look after the well being of five children who had a very close relationship with their father, and face the responsibility of raising a five-month-old infant as a single mother. She also had to build up the strength and courage to stand up and lead the businesses her husband left behind, which included the most popular Latin-themed nightclub at the time called The Rumba Room.

At first, the idea of heading her husband’s empire was inconceivable to her, but the need to provide the basic necessities to her children gave her the strength to stand up to anyone that would tell her she could not do it. “I can still hear my husband say: ‘be tough, you can do it’”, she says.

And she prevailed. Delia has become not only an excellent mother, whose youngest 14 year-old son has met his father through her stories and accomplishments, but a successful woman entrepreneur and role model to her two daughters Brianna and Ali. She has continued leading the Latin entertainment market with reality shows like “Jenni Rivera Presents Chiquis and Raq-C”, along the late singer Jenni Rivera, and helped maintain the success of the legendary Pico Rivera Sports Arena. She was key in the successful tours of the artists her husband once managed, and was able to crown the Rumba Room as a-must- visit landmark in Los Angeles, until its closing in 2011.

Now she is ready to honor her husband once again, but credit herself with the opening of the Rumba Room Live in Anaheim, California, to serve not only the growing Latin community in the area, but to showcase the beautiful Latin music, culture and traditions to all ethnic background visitors. “It is a bittersweet moment, I wish I was opening the club with my husband alive, but I know he would be proud”, says the grandmother of one. “I’m so excited that Rumba Room is finally here. For me, it’s a pretty big accomplishment”.

Rumba Room Live in Anaheim is the first of many she hopes to open all over the United States, setting an example to all women that can relate to her story. “People say not to give up, but really, don’t give up. I was told so many times, even from family members, to give up, but I pushed through. Don’t let people tell you what to do. Believe in yourself and in what you are doing and anything is possible”, she says.

Though her entrepreneurship has led her to become one of the most successful women in the Latin entertainment market, nothing makes her more proud and happy than being a mother of six and a grandmother to young Charlie. “I want my children to be good people, caring, to excel in everything they do, to follow their heart”, she says. “I want them to grow up to be good human beings, as I know my husband would have wanted”.

Editors Note: The video interview took place in 2017 after the opening of Rumba Room Live.