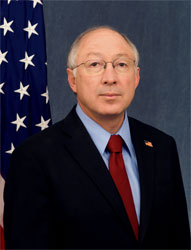 I want to thank Ken for his hard work and leadership on behalf of the American people.  As the Secretary of the Interior, Ken has helped usher in a new era of conservation for our nation’s land, water, and wildlife.  Ken has played an integral role in my Administration’s successful efforts to expand responsible development of our nation’s domestic energy resources.  In his work to promote renewable energy projects on our public lands and increase the development of oil and gas production, Ken has ensured that the Department’s decisions are driven by the best science and promote the highest safety standards.  Ken has also made historic strides  in strengthening our nation to nation relationship with Indian Country, helping to resolve longstanding disputes and make tribal communities safer and stronger. I have valued Ken’s friendship since we both entered the Senate in 2005, and I look forward to receiving his counsel even after he returns to his home state of Colorado.

From the Office of the Interior

Secretary of the Interior Ken Salazar announced today that he will return to his home state of Colorado, having fulfilled his promise to President Obama to serve four years as Secretary. Secretary Salazar has informed President Obama that he intends to leave the Department by the end of March.

“Colorado is and will always be my home. I look forward to returning to my family and Colorado after eight years in Washington, D.C.,” said Secretary Salazar. “I am forever grateful to President Obama for his friendship in the U.S. Senate and the opportunity he gave me to serve as a member of his cabinet during this historic presidency.”

“I have had the privilege of reforming the Department of the Interior to help lead the United States in securing a new energy frontier, ushering in a conservation agenda for the 21st century, and honoring our word to the nation’s first Americans,” added Salazar. “I thank the more than 70,000 employees at the Department for their dedication to our mission as custodians of America’s natural and cultural resources. I look forward to helping my successor in a seamless transition in the months ahead.”

“From the Crown of the Continent in Montana to the prairie grasslands of Kansas to the Everglades Headwaters in Florida, we are partnering with landowners, farmers, and ranchers to preserve their way of life and the irreplaceable land and wildlife that together we cherish,” Salazar said. “We have established an enduring vision for conservation in the 21st century that recognizes all people from all walks of life.”

Under Secretary Salazar’s leadership, Interior has played a keystone role in developing a secure energy future for the United States, both for renewable and conventional energy. Since 2009, Interior has authorized 34 solar, wind and geothermal energy projects on public lands that total 10,400 megawatts – or enough to power over 3 million homes. Salazar also oversaw a visionary blueprint for solar energy development in the West and established the nation’s first program for offshore wind leasing and permitting in America’s oceans.

“Today, the largest solar energy projects in the world are under construction on America’s public lands in the West, and we’ve issued the first leases for offshore wind in the Atlantic,” said Salazar. “I am proud of the renewable energy revolution that we have launched.”

Salazar has also undertaken an historic overhaul of Interior’s management of oil and gas resources, implementing tough new ethics standards for all employees. He led Interior’s response to the Deepwater Horizon oil spill and split the former Minerals Management Service into three independent agencies with clear, independent missions to oversee ocean energy management and revenue collection. Interior has offered millions of acres offshore in the Gulf of Mexico for safe and responsible exploration and development and is proceeding with cautious exploration of Arctic resources. Onshore, Interior has also leased millions of acres for oil and gas development over the last four years while protecting special landscapes for hunting and fishing and other uses.

“We have undertaken the most aggressive oil and gas safety and reform agenda in U.S. history, raising the bar on offshore drilling safety, practices and technology and ensuring that energy development is done in the right way and in the right places,” said Salazar. “Today, drilling activity in the Gulf is surpassing levels seen before the spill, and our nation is on a promising path to energy independence.”

Secretary Salazar’s term was marked by historic progress for Indian Country with the passage of the Cobell settlement that honorably and responsibly addressed long-standing injustices regarding the U.S. government’s trust management. The President also signed into law six Indian water rights settlements, totaling over $1 billion, that will help deliver clean drinking water to tribal communities and provide certainty to water users across the West. Salazar spearheaded a sweeping reform – the first in 50 years – of federal surface leasing regulations for American Indian lands that will streamline the approval process for home ownership, expedite economic development, and spur renewable energy in Indian Country.

“President Obama has made it a priority to empower our nation’s first Americans by helping to build stronger, safer and more prosperous tribal communities,” Salazar said. “This administration has been marked by a renewed commitment to honoring a nation-to-nation relationship and ensuring tribes have a greater role in federal decisions affecting Indian Country.”

Salazar, a fifth-generation Coloradoan, has served his state and the nation for 14 continuous years as Colorado Attorney General, United States Senator and as the 50th secretary of the U.S. Department of the Interior.