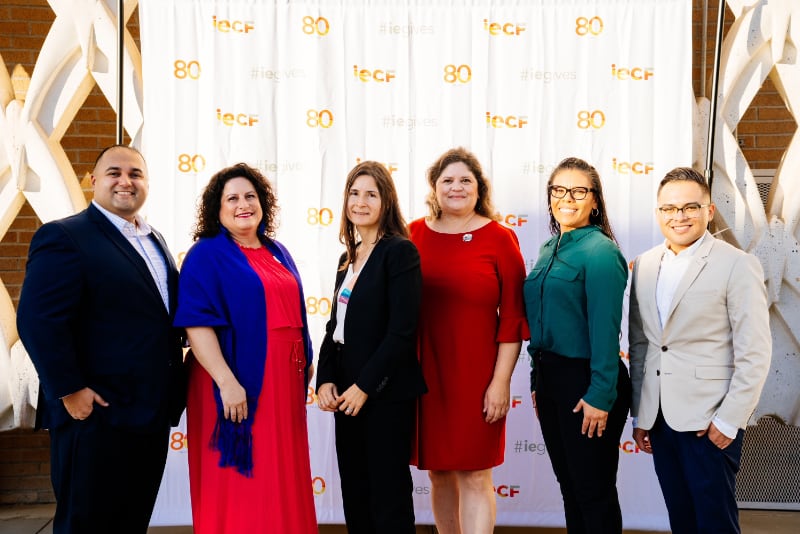 CIELO Fund sets goal of raising $80k in its inaugural year with calls for grant applications expected later this year and grantmaking in 2023. New report released by the UCR Center for Social Innovation in partnership with IECF presents a profile of the issues impacting the Inland Empire’s Latino Community

In commemoration of Latino Heritage Month, the Inland Empire Community Foundation (IECF) announced today the launch of the Cultivating Inland Empire Latino Opportunity, or CIELO Fund, established to uplift and invest in Latino-led and serving organizations and initiatives throughout Riverside and San Bernardino counties. The CIELO Fund is one of IECF’s eight signature funds launched this year in celebration of the Foundation’s 80th anniversary and has a goal of raising $80k in its inaugural year.

“As the Latino community in the Inland Empire grows, so should investments in the frontline organizations providing critical resources and support to our families daily,” said IECF Board Member and Founding CIELO Fund Chair Jesse Melgar. “We launched the CIELO Fund to rewrite the script about Latinos in our region by telling authentic stories about the impact and resilience of our community. We are educators and entrepreneurs, farmworkers and first responders, artists and activists – and so much more. Through this Fund we hope to catalyze a new network of community philanthropists at all levels of giving who are stepping up to invest in the communities we grew up in, live in, and that we will call home for generations to come.”

● College Graduation Rates Lag: Only 11% of Latinos in the region have a bachelor’s degree or higher, well below the state average of 35% and the national average of 33%.
● Income Inequality: While Latino household incomes in the region have grown between 2010 and 2020 by nearly $10,000, the Latino community still lags behind non-Hispanic Whites in the region by nearly $14,000 per year as of 2020.
● Child Poverty Rates: Poverty rates are also much higher among Latinos in the Inland Empire and these gaps are even more stark when it comes to child poverty. Latino children in the Inland Empire are twice as likely as White children to live in poverty.
● Access to Health Care: The proportion of Inland Latinos without health insurance in 2020 was 12% which was more than double the share among non-Hispanic White residents in the region – 5%. Latino adults in the Inland Empire were also much less likely to have received routine health check-ups.
● Civic Participation: Only about 50% of eligible Latinos cast ballots in the 2020 November Presidential election, which past research has shown to be the result of insufficient investments in voter engagement and outreach–by parties, campaigns, and nonpartisan efforts alike.
● Representation in Elected Office: Locally, Latinos have the greatest representation by numbers at the municipal and education or school board level, but overall, hold less than 25% of all elected federal, state, and local offices in the region.
● Homeownership: Homeownership is a relatively bright spot for Latinos in the region. In 2020, Latino homeownership was significantly higher in the Inland Empire, 60%, than comparable figures for Latinos in Los Angeles County and in California more generally.

“Our communities and organizations are too often overlooked when it comes to funding and that limits our ability to provide the crucial services our familias need,” said Luz Gallegos, executive director of the nonprofit TODEC Legal Center. “The CIELO Fund is being led by regional Latino leaders who understand the need first hand and are taking action. I am proud to be part of this important effort.”

“There is urgency to raise the kinds of philanthropic dollars Latino-led and serving organizations need, given what we see in the data and in our own communities,” said Michelle Decker, President and CEO of the Inland Empire Community Foundation. “I could not be prouder of our Board’s commitment and the hard work of Member Jesse Melgar to share and elevate the Latino experience and opportunities in the Inland Empire and beyond.”

Helping guide the CIELO Fund’s work is a group of dedicated regional Latino leaders whose careers have been committed to strengthening the Inland Empire through effective advocacy and agenda setting.

What Leaders are Saying

“I’m excited to hear about the launch of the CIELO Fund at the Inland Empire Community Foundation – a Fund created by Latinos and for Latinos with the goal of uplifting and investing in the community. The Inland Empire is one of the fastest growing regions in the entire country, let alone the state. Making up nearly 52% of the Inland Empire’s population, the Latino community is central to that growth. As our community grows so should support for the organizations providing the critical, educational, and immigration services on the ground. That’s why the CIELO Fund is such an important step forward. From Coachella to Riverside to San Bernardino, it’s inspiring to see leaders from across the region come together to launch this effort. ¡Suerte!”

“I want to congratulate the Inland Empire Community Foundation for the launch of the new CIELO Fund. The Latino community is critical to our region’s success today and will continue to be in the future. We are the backbone of our economy. We are workers, doctors, teachers, and students driving our region forward every day. I commend the leaders who are stepping up to launch this effort, many of whom I am proud to call my friends. I know that with each of you coming together you will work to make transformative change for Riverside and San Bernardino counties and for the Latino led and serving organizations helping our families thrive.”