Exclusive sneak peek of what it takes to build the Greatest Show On Earth! 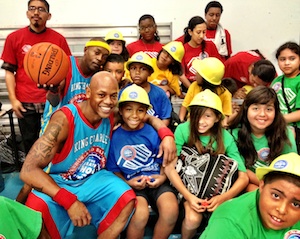 Over 100 children were amazed by the abilities that The King Charles Troupe performed today at the Boys & Girls Club of Pomona Valley in a private event that gave the kids a special sneak peek of what to expect at the Citizens Business Bank Arena when Ringling Bros. and Barnum & Bailey presents Built to Amaze! gets on with the show thru August 23.

Energetic and difficult choreographies were displayed on the b-ball court and the King Charles Troupe left the children in awe with the lightness in which they went about shooting hoops and playing jump rope, all while riding their famous unicycles. Once the performance was over, members of the troupe built up the club members by sharing wise words and encouraged them to stay in school in order for them to be the best at what they want to be later in life.

Hispanic Lifestyle took in the Ontario opening night performance and had a great time! Our recommendation, come early and enjoy the pre show activities.

Ringling Bros. and Barnum & Bailey presents Built to Amaze! Will be performing at the Citizens Business Bank Arena, Ontario (7/19-7/23); and Honda Center, Anaheim (7/26-8/4). Tickets are value priced from $12 – $120. For more information and to purchase tickets visit www.ringling.com

About Ringling Bros. and Barnum & Bailey present “Built To Amaze!”
Andre McClain, Ringmaster and America’s favorite cowboy takes the Ringling Bros. reins and accompanied by his horse Comanche, leads his Built To Amaze! funny and mischievous super circus supervisors, to construct The Greatest Show On Earth. A fantastic design with more than 110 of the world’s best performers representing 17 countries along with 95 exotic and domestic animals will be assembled, creating never-before-seen heart pounding performances.