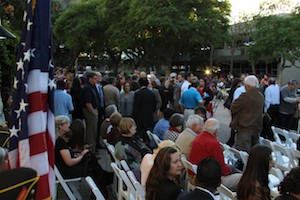 A Youth Arts Exhibit will be held on Monday, June 3 from 5:30-8:30 p.m. at the Cesar Chavez Community Center at the corner of University Avenue and Kansas Street.  It is open to the public.  Sixth grade students from Madison Elementary have taken photographs and written poetry inspired by the 10 Core Values of Cesar Chavez.  They will be on display in the Chavez Center’s main auditorium.  In addition, local artists will be presenting small group activities for students and families.  Photographer Carlos Puma trained the Madison students to take better photographs with their iPods. Linoleum cut artist Jesus Cruz will be sharing a unique new design. Cosmé Cordova will present an embossed print made from the Memorial’s medallion.  Local muralist  Ronaldo del Cid will be creating a mural for the event to be finished with the guests in attendance. Two local ballet folklóricos will perform.

A gallery art exhibit will be held from Tuesday, June 4 through Saturday, June 8 at the CBU gallery at Main Street and University on the downtown pedestrian mall.  It will be open from 12:00-6:00 on Tuesday through Friday and from 11:00-2:00 on Saturday.  California Baptist University has graciously loaned this space for the event.  The exhibit is being curated by Veronica Hernandez and Cosmé Cordova.  More than 15 regional artists will have pieces on display responding to the themes of labor, farmworkers, and the lessons of Cesar Chavez.   The exhibit will also include past posters from local Chavez events and drawings, sketches and photos of the work of the Memorial sculptor Ignacio Gomez. An artist’s reception will be held on Thursday night, June 6 from 6:00-9:00.

An evening entitled Pláticas y Memorias will be held on Wednesday, June 5 from 7:00-9:00 pm at the same Culver Center on the pedestrian mall at University and Main.  This evening includes reflections on the beginnings and growth of the UFW and the farmworker movement.  It will be moderated by Pitzer College emeritus professor Jose Zapata Calderon.  Panelists include former United Farm Worker vice-president and founder Dolores Huerta, former National Farmworker Ministry leader Chris Hartmire, former UFW volunteer and regional artist Barbara Carrasco, and former boycott leader Jerry Ryan.

An evening entitled La Causa in Film will be held on Friday, June 7 from 7:00-9:00 at the Universalist Unitarian Church at 3657 Lemon Street in downtown Riverside.  Short films, documentaries, and narrated slide shows depicting the life and times of Cesar E. Chavez and the farmworker movement will be shown.

A celebratory mass will be held from 7:30-8:30 a.m. on Saturday, June 8 at Our Lady of Guadalupe Shrine in Riverside’s Eastside at the corner of Ninth and Park.  A community procession will walk from the church to the unveiling site immediately after the mass.

The Cesar E. Chavez Memorial will be unveiled during a ceremony beginning at 10:00 am on Saturday, June 8 on Riverside’s Main Street downtown pedestrian mall at the intersection of University and Main. The Latino Network Memorial Committee will take the time to thank all those who have contributed to this heroic and monumental effort to make the memorial a reality.  Guest speaker Paul Chavez, Cesar’s son and longtime UFW activist, will speak on behalf of the Chavez family.