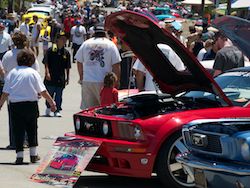 Hispanic Lifestyle is pleased to be supporting this event.

The City of Perris’ annual Rods and Rails festival has grown from a modest event to one of the largest community gatherings thanks to a series of relationships forged in recent years—and the 2012 rendition of the big show promises to be better than ever.

“If you aren’t having fun at the Rods and Rails, you aren’t trying,” said recreation supervisor Maria Mathey, who coordinates the event. “Come on out and spend the day in the shade. There is no way you can say you did not have a good time or were bored. There is truly something for everyone.”

Mathey said the City’s ability to forge relationships with the railway museum, Set Free Christian Fellowship and the Perris Valley Historical & Museum Association has taken the rods and rails fest from an event that used to attract 20 or 30 vehicles to one that now draws several times that many.

Last year’s event attracted 5,500 visitors and Mathey said she expects the 2012 Rods and Rails to top that mark.

The 13th Annual Rods & Rails Extravaganza and Historic Potato Festival—as the dual events are formally known—takes place from 9 a.m. to 5 p.m. June 9 at the Orange Empire Railway Museum, 2201 South A Street.  The 79-acre railway museum features one of the largest collections of railroad rolling stock in the U.S. and visitors can also enjoy trolley and cable car exhibits and rides.

Those include performances by Creedence Relived by Timmy and the PO Boys Concert; James Isabel “Sometimes Country” and Unidos – Christian Rock. Free Indeed and Christians Motorcycle Ministry will host a praise worship service, the blessing of motorcycle riders and the Christian band Amy and the Road Dogs. Free Indeed ministries also will host a youth bicycle show for youngsters from 4 to 18 and a talent show for participants 5 to 19 years of age.

The Perris Valley Historical & Museum Association will be honoring the Eller family for their contributions to the City’s potato industry. Three Eller brothers—Jack, Pete and Jay—moved to the Perris Valley in the 1940s and established a trucking firm that specialized in hauling potatoes from the fields to packing sheds, where they were graded and made ready to send to market. Jack Eller has since died but his two brothers are expected to attend the upcoming festiva

“There were so many hard-working families who contributed to the success of the Perris Valley’s potato harvest during the heyday of the 1940s, 50s and 60s,” said Katie Keyes, former president of the historical association. “They created a lot of jobs as were a big part of the economy.”

The Rods and Rails and Potato Festival includes FREE general admission and free parking. There is a $2 entry fee for the youth bicycle show and a limit of three entries per person.

Car and motorcycle enthusiasts can register in advance by downloading the application off the City’s website,www.cityofperris.org  or signing up on line for $20. An event hat and goodie bag will go to the first combined 150 entrants.

Registration is available the day of the event, but space is very limited by then. For more information please call Perris Community Services at 951-943-6603.