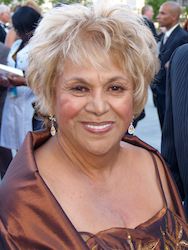 The Latino Theater Company will host the Sixth Annual Los Angeles Theatre Center Gala on Saturday, August 11, 2012, which will include dinner, dancing, a silent auction, and the presentation of awards honoring five exceptional individuals for their support of the objectives of the Los Angeles Theatre Center (LATC), a City of Los Angeles Cultural Affairs Department facility operated by the Latino Theater Company for the last seven years.

Awardees will receive giclee prints of “Sueno de Alicia” by locally-based but internationally acclaimed artist Yolanda Gonzalez, formerly of Self Help Graphics. Her paintings have been exhibited in museums and galleries throughout the world.

The Los Angeles Theatre Center is a microcosm of Los Angeles; a destination center for those pursuing artistic excellence; a laboratory where both tradition and innovation are honored and honed. The programming captures the creative vitality that comes from people telling their own stories and digging deep into their traditions to address important issues of our day. The LATC is a space amidst the excitement of downtown Los Angeles where the convergence of people, cultures and ideas in theatre, dance and music gives birth to our future.

Activities at the Gala include a silent auction. Proceeds will support the activities of Latino Theater Company and Los Angeles Theatre Center.

A cocktail reception commences at 6:00 p.m., followed by a gourmet dinner (Ilan Hall, of The Gorbals Restaurant, winner of Bravo TV’s Top Chef competition) at 7:00 p.m., succeeded by the main program and award ceremony at 8 p.m. Following the main program, there will be an after-party with dancing.

Many dignitaries and Hollywood celebrities are expected to be in attendance.

For more information about the event, ticket reservation and sponsorship, please call LATC Development Associate Armando Huipe at (213) 489-0994 ext. 100 or e-mail her at Armando@thelatc.org