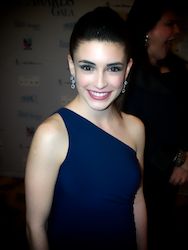 Hispanic Lifestyle spoke with actress Daniela Bobadilla who appears in Charlie Sheen’s Anger Management. Daniela was also featured in the NBC television drama “Awake”. In this video segment Daniela talks about her career. Daniela is one our “Young Latinos in Hollywood” to watch.
We spoke with Daniela at the 2012 National Hispanic Media Coalition’s “Impact Awards” Gala

This segment was featured in episode #hltv5188 of Hispanic Lifestyle.