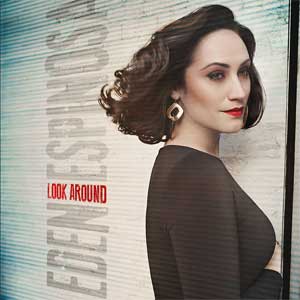 Look Around is scheduled for release on December 18, 2012 on all major online retailers including Cd Baby, iTunes, and Amazon.

Some of today’s most talented songwriters are getting almost no airplay. Although, Broadway composers and lyricists had consistently made their way onto popular music charts for decades, the same artists seem to have all but disappeared from pop music radio today. It was not long ago that the music of Tin Pan Alley dominated the radio waves. What happened? Broadway actress Eden Espinosa (Wicked, Rent, Brooklyn) is trying to find out and regain lost ground for the songwriters of today’s Broadway music.

During preparation for the release of her Debut Album, Look Around, she took a few moments to share her thoughts. “I think that when rock and roll came on the scene in the 50’s, we started seeing a big decline in the amount of music making it from the Broadway stage to the radio. This new energetic music excited young people. I just don’t think that Broadway writers kept up with the tastes of the younger generations. They were still putting out music that was holding onto a style that just wasn’t popular anymore. But, there are also those like Lin-Manuel Miranda who wrote In The Heights and Duncan Sheik who did the music for Spring Awakening that I think brought something fresh to Broadway that today’s generation could really identify with. Those kinds of writers are who inspired me to do this album.

I wanted to see if it was possible to bring the music of Broadway back to the mainstream music scene like it used to be.

I got with my producer and we came up with a sound that brings a pop sensibility to some modern Broadway hits. We wanted to come up with something that would be accessible to both die-hard musical theater fans and pop music listeners alike. It’s very organic. Sometimes it’s like singer-songwriter stuff but then it also has full rock band moments too. I can definitely see it getting some mainstream airplay. I just want Broadway music fans to be able to share some of songs they love with friends that are more into pop music genres. Who knows? Maybe their friends will even go check out more Broadway music once they realize that its not all “Surrey With the Fringe On Top.” I just want everybody to get a chance to enjoy the music of these great writers.” Can we ever return to times where Broadway hits are once again broadcast on mainstream radio? One woman hopes to be closer to an answer on December 18th.

Eden plans to host a live chat on her website www.edenespinosa.com on December 14th, 9pm EST to discuss this topic with her fans.

Eden will host an Album Release Party on December 17th in Hollywood, CA. For tickets to this event go to www.edenespinosa.brownpapertickets.com

Eden brings an innovative and deeply personal interpretation to some modern Broadway hits. Working with her production team, she has endeavored to create a sound that is accessible to both die-hard Broadway fans and pop music listeners alike. The rich organic soundscape, developed by producer Joseph Abate, is a testament to the beauty and depth that can be achieved by coupling quality musicians with artful recording technique. It is Eden’s sincere wish that this album will bring a new and broader listening audience to the music of some of Broadway’s most talented songwriters.