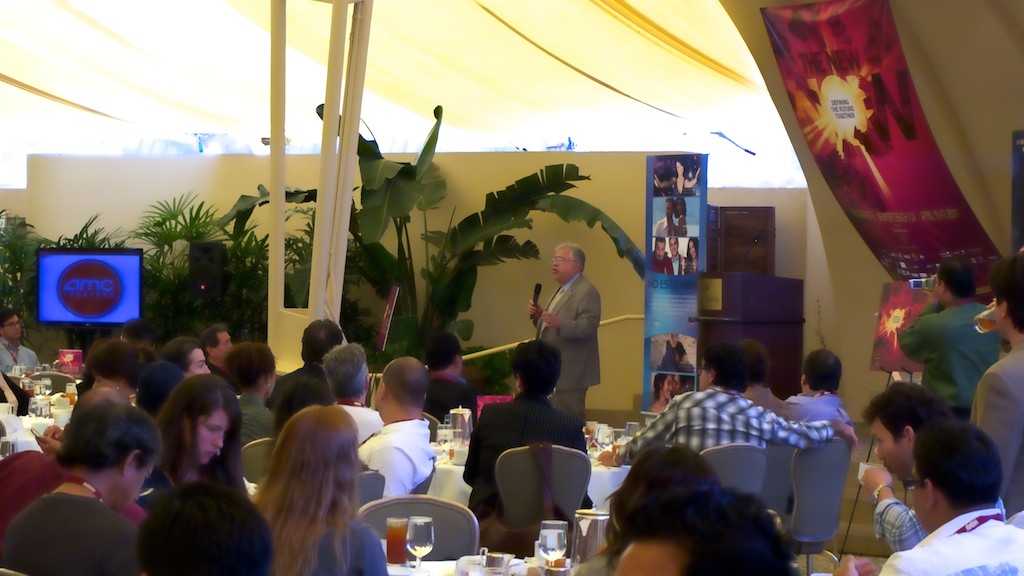 The National Association of Latino Independent Producers (NALIP) today  announced that its thirteenth annual NALIP Conference will be held April 13 – 15, 2012 in Universal City, California with a new special edition of the NALIP ActorSummit on April 12. Online registration is available now.

NALIP 2012: Diverse Voices, Universal Content is presented by Time Warner and the National Latino Media Council. Co-chairs Frank B. Gonzalez of The Disney/ABC Television Group and Juan Carlos Zaldivar of Phonograph Films will host the annual, premiere Latino nonprofit gathering of top level Latino executives, content makers and game changers in the Latino media field. This dynamic and star-studded weekend includes keynotes, plenaries, ‘Conversations With,’ workshops and networking events. The conference begins Friday, with keynote speaker, film director, screenwriter, producer, cinematographer, editor and musician, Robert Rodriguez. Rodriguez’s films, which range from sleeper hit EL MARIACHI to FROM DUSK TILL DAWN and SIN CITY as well as the SPY KIDS franchise, exemplify how he embodies expressing a diverse voice while creating content that is universal. Saturday’s keynote speaker will be Universal Studios’ President and COO Ron Meyer. Meyer, the longest-running Studio Chief, is dedicated to creating a corporate culture of stability and consistency that drives a successful business.

Furthering the tradition of celebrating Latino visionaries, NALIP will host a red carpet gala honoring one of only eight living performers who has won entertainment’s grand slam of the industry’s most prestigious awards: The Oscar, The Emmy, The Tony and The Grammy – the inspirational and magnanimous, Rita Moreno. Ms.Moreno will receive NALIP’s highest honor, the Lifetime Achievement Award. Additional media luminaries being honored at the annual gala include former Nosotros President and current Velasco & Associates President,Jerry Velasco who will receive the Lifetime Achievement Award for Advocacy and the Estela “Rising Star’ Award winners Patricia Martinez de Velasco, Erin McGinnis and Ari Palos, who will be awarded a $7,500 grant endowed by the McDonalds Corporation.

The NALIP national conference is organized as three days of workshops and plenaries on film, television and documentaries, plus groundbreaking case studies. These include “The Million Dollar Screenwriting Workshop”, which turns writing into an effortless, step-by-step process, “Packaging your Documentary for Success”, discusses how to best present your project pitch, proposal and trailer. “The Reality of Reality Television” presents an in depth look inside the world of reality television, why it works, the opportunities and how to break in. “Inside the Mind of the Investor: How Money Decisions are Made” explores how to prepare the best pitch and approach to maximize chances of success. Also scheduled are “Women in Media, Women Who Rock!” and “Make Money in TV Commercials.”

Latinos watch more television, buy more movie tickets and consume more media than any other ethnicity, yet Latinos comprise less than 1% of executives in Hollywood; the percentage of minority industry writers in film and television has been frozen at 6% since 1999, and the percentage of directors is lower still. There are over 50 million Latinos in the U.S., which is more than Spaniards in Spain or Canadians in Canada. Latinos are estimated to expend over $1 billion on U.S. filmed entertainment, and $1 trillion in general market buying power. Twenty-six million U.S. moviegoers are Latino, most commonly between the ages of 12 and 34, and are 100% more likely than the national average to be considered “frequent moviegoers.” Nielsen Media has determined that Latinos represent an overwhelming 28% of today’s heavy moviegoers, that they buy more tickets per year than any other ethnic group, and constitute the fastest-growing segment of the overall movie-going population.

NALIP’s closing plenary, Race and the Media, will engage in an insightful and important conversation about the systemic, economic and cultural factors affecting race and representation in the Media. Jennifer Lawson, Executive Vice President of Corporation for Public Broadcasting, Alex Nogales, Director of National Hispanic Media Coalition, Joe Torres, author of News for all the People, and Dr. Darnell Hunt, a sociologist at UCLA will discuss the effects of exclusion, and what can be done to improve representation of Latinos in front of and behind the cameras. NALIP’s mission is to address the vital need for equitable Latino representation to the most underrepresented and largest ethnic minority in the country across all entertainment mediums