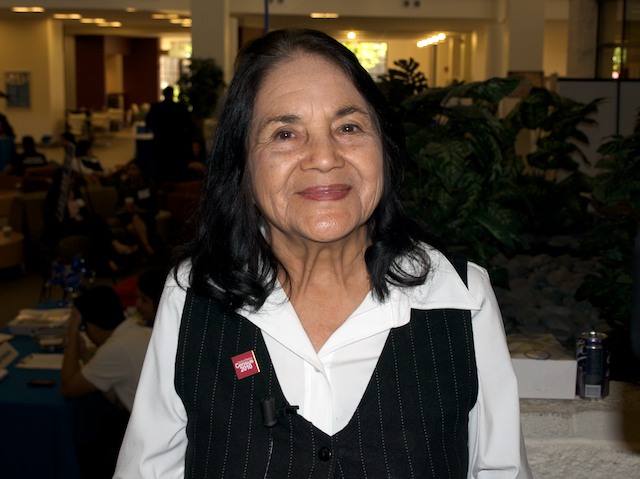 Today, President Barack Obama named thirteen recipients of the Presidential Medal of Freedom.  The Medal of Freedom is the Nation’s highest civilian honor, presented to individuals who have made especially meritorious contributions to the security or national interests of the United States, to world peace, or to cultural or other significant public or private endeavors.  The awards will be presented at the White House in late spring.

President Obama said, “These extraordinary honorees come from different backgrounds and different walks of life, but each of them has made a lasting contribution to the life of our Nation.  They’ve challenged us, they’ve inspired us, and they’ve made the world a better place.  I look forward to recognizing them with this award.”

The following individuals will be awarded the Presidential Medal of Freedom:

Huerta is a civil rights, workers, and women’s advocate. With Cesar Chavez, she co-founded the National Farmworkers Association in 1962, which later became the United Farm Workers of America.  Huerta has served as a community activist and a political organizer, and was influential in securing the passage of California’s Agricultural Labor Relations Act of 1975, and disability insurance for farmworkers in California.  In 2002, she founded the Dolores Huerta Foundation, an organization dedicated to developing community organizers and national leaders.  In 1998, President Clinton awarded her the Eleanor Roosevelt Award for Human Rights.

From 1997 to 2001, under President William J. Clinton, Albright served as the 64th United States Secretary of State, the first woman to hold that position.  During her tenure, she worked to enlarge NATO and helped lead the Alliance’s campaign against terror and ethnic cleansing in the Balkans, pursued peace in the Middle East and Africa, sought to reduce the dangerous spread of nuclear weapons, and was a champion of democracy, human rights, and good governance across the globe.  From 1993 to 1997, she was America’s Permanent Representative to the United Nations.  Since leaving office, she founded the Albright Stonebridge Group and Albright Capital Management, returned to teaching at Georgetown University, and authored five books.  Albright chairs the National Democratic Institute and is President of the Harry S. Truman Scholarship Foundation.

Doar was a legendary public servant and leader of federal efforts to protect and enforce civil rights during the 1960s.  He served as Assistant Attorney General in charge of the Civil Rights Division of the Department of Justice.  In that capacity, he was instrumental during many major civil rights crises, including singlehandedly preventing a riot in Jackson, Mississippi, following the funeral of slain civil rights leader Medgar Evars in 1963.  Doar brought notable civil rights cases, including obtaining convictions for the 1964 killings of three civil rights workers in Neshoba County, Mississippi, and leading the effort to enforce the right to vote and implement the Voting Rights Act of 1965.  He later served as Special Counsel to the U.S. House Committee on the Judiciary as it investigated the Watergate scandal and considered articles of impeachment against President Nixon.  Doar continues to practice law at Doar Rieck Kaley & Mack in New York.

One of the most influential American musicians of the 20th century, Dylan released his first album in 1962.  Known for his rich and poetic lyrics, his work had considerable influence on the civil rights movement of the 1960s and has had significant impact on American culture over the past five decades.  He has won 11 Grammys, including a lifetime achievement award.  He was named a Commandeur dans l’Ordre des Art et des Lettresand has received a Pulitzer Prize Special Citation.  Dylan was awarded the 2009 National Medal of Arts.  He has written more than 600 songs, and his songs have been recorded more than 3,000 times by other artists.  He continues recording and touring around the world today.

A physician and epidemiologist, Foege helped lead the successful campaign to eradicate smallpox in the 1970s.  He was appointed Director of the Centers for Disease Control and Prevention in 1977 and, with colleagues, founded the Task Force for Child Survival in 1984.  Foege became Executive Director of The Carter Center in 1986 and continues to serve the organization as a Senior Fellow.  He helped shape the global health work of the Bill and Melinda Gates Foundation, and remains a champion of a wide array of issues, including child survival and development, injury prevention, and preventative medicine.  Foege’s leadership has contributed significantly to increased awareness and action on global health issues, and his enthusiasm, energy, and effectiveness in these endeavors have inspired a generation of leaders in public health.

Glenn is a former United States Marine Corps pilot, astronaut, and United States Senator.  In 1962, he was the third American in space and the first American to orbit the Earth.  After retiring from the Marine Corps, Glenn was elected to the U.S. Senate in Ohio in 1974.  He was an architect and sponsor of the 1978 Nonproliferation Act and served as Chairman of the Senate Government Affairs committee from 1978 until 1995.  In 1998, Glenn became the oldest person to visit space at the age of 77.  He retired from the Senate in 1999.  Glenn is a recipient of the Congressional Gold Medal and the Congressional Space Medal of Honor.

Hirabayashi openly defied the forced relocation and internment of Japanese Americans during World War II.  As an undergraduate at the University of Washington, he refused the order to report for evacuation to an internment camp, instead turning himself in to the FBI to assert his belief that these practices were racially discriminatory.  Consequently, he was convicted by a U.S. Federal District Court in Seattle of defying the exclusion order and violating curfew.  Hirabayashi appealed his conviction all the way to the U.S. Supreme Court, which ruled against him in 1943.  Following World War II and his time in prison, Hirabayashi obtained his doctoral degree in sociology and became a professor.  In 1987, his conviction was overturned by the U.S. Court of Appeals for the Ninth Circuit.  Hirabayashi died on January 2, 2012.

Karski served as an officer in the Polish Underground during World War II and carried among the first eye-witness accounts of the Holocaust to the world.  He worked as a courier, entering the Warsaw ghetto and the Nazi Izbica transit camp, where he saw first-hand the atrocities occurring under Nazi occupation.  Karski later traveled to London to meet with the Polish government-in-exile and with British government officials.  He subsequently traveled to the United States and met with President Roosevelt.  Karski published Story of a Secret State, earned a Ph.D at Georgetown University, and became a professor at Georgetown’s School of Foreign Service.  Born in 1914, Karski became a U.S. citizen in 1954 and died in 2000.

Born in 1860, Low founded the Girl Scouts in 1912.  The organization strives to teach girls self-reliance and resourcefulness.  It also encourages girls to seek fulfillment in the professional world and to become active citizens in their communities.  Since 1912, the Girl Scouts has grown into the largest educational organization for girls and has had over 50 million members.  Low died in 1927.  This year, the Girl Scouts celebrate their 100th Anniversary, calling 2012 “The Year of the Girl.”

One of our nation’s most celebrated novelists, Morrison is renowned for works such as Song of Solomon, Jazz, and Beloved, for which she won a Pulitzer Prize in 1988.  When she became the first African American woman to win a Nobel Prize in 1993, Morrison’s citation captured her as an author “who in novels characterized by visionary force and poetic import, gives life to an essential aspect of American reality.”  She created the Princeton Atelier at Princeton University to convene artists and students.  Morrison continues to write today.

An ardent advocate for Israel’s security and for peace, Shimon Peres was elected the ninth President of Israel in 2007.  First elected to the Knesset in 1959, he has served in a variety of positions throughout the Israeli government, including in twelve Cabinets as Foreign Minister, Minister of Defense, and Minister of Transport and Communications.  Peres served as Prime Minister from 1984-1986 and 1995-1996.  Along with Israeli Prime Minister Yitzhak Rabin and then-PLO Chairman Yasser Arafat, Peres won the 1994 Nobel Peace Prize for his work as Foreign Minister during the Middle East peace talks that led to the Oslo Accords. Through his life and work, he has strengthened the unbreakable bonds between Israel and the United States.

Stevens served as an Associate Justice of the U.S. Supreme Court from 1975 to 2010, when he retired as the third longest-serving Justice in the Court’s history.  Known for his independent, pragmatic and rigorous approach to judging, Justice Stevens and his work have left a lasting imprint on the law in areas such as civil rights, the First Amendment, the death penalty, administrative law, and the separation of powers.  He was nominated to the Supreme Court by President Gerald Ford, and previously served as a judge on the U.S. Court of Appeals for the Seventh Circuit.  Stevens is a veteran of World War II, in which he served as a naval intelligence officer and was awarded the Bronze Star.

In addition to accomplishing an outstanding career as the all-time winningest leader among all NCAA basketball coaches, Summitt has taken the University of Tennessee to more Final Four appearances than any other coach and has the second best record of NCAA Championships in basketball.  She has received numerous awards, including being named Naismith Women’s Collegiate Coach of the Century.  Off the court, she has been a spokesperson against Alzheimer’s.  The Pat Summitt Foundation will make grants to nonprofits to provide education and awareness, support to patients and families, and research to prevent, cure and ultimately eradicate early onset dementia, Alzheimer’s type.