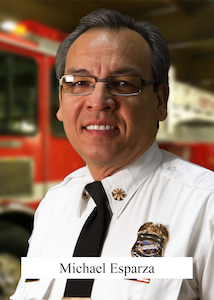 As Interim Fire Chief, Esparza will continue to oversee the department’s daily operations. He has handled that responsibility as Acting Chief since Earley retired on Dec. 27. Esparza is expected to serve as Interim Chief for at least six months.

“The Riverside Fire Department has been my life for more than three decades, so my roots with this organization run very deep,” Esparza said. “I look forward to further serving the Department that has meant so much to me and my family.”

Esparza was one of three senior officials in the Riverside Fire Department to express interest in the Fire Chief position after Earley retired. City Manager Barber sought to rotate the three through the Acting Chief job before naming a Chief. That plan, however, was dropped last week after concerns were raised in the community.

Esparza will not be a candidate when the search is conducted, having agreed to forgo that opportunity in order to become Interim Chief. City Manager Barber has a practice of not naming executives to interim posts if they plan to seek to fill the job on an on-going basis. Barber believes that would give anyone named to the interim job an unfair advantage over other candidates.

“It is a testament to Mike Esparza’s character and his devotion to the Department that he would forfeit a chance at leading RFD as Chief in the future in order to provide leadership now,” Barber said. “I greatly appreciate his willingness to step in and keep the department moving forward.”

As Interim Chief, Esparza will receive a 10 percent increase in his compensation, raising his annual salary to approximately $204,000.

“The Riverside City Firefighters’ Association is in complete support of Mike Esparza as the Interim Fire Chief,” Strack said. “We are confident that he is the right person to unify the department and continue to serve the residents and visitors of Riverside with world-class fire protection.”

Esparza began his career with the City of Riverside on September 11, 1981 as a Firefighter. He was promoted to Engineer in 1989, to Captain in the same year and then to Battalion Chief in 1998. After serving as a field Battalion Chief, Esparza was appointed to Division Chief in charge of the Training Division. He also provided oversight to the City’s Emergency Operation Center (EOC) and served as the department Safety Officer.

Prior the Chief Esparza’s appointment to Deputy Chief, he served as the City Fire Marshal overseeing the Fire Prevention Division. In this assignment he managed the fire, life safety and hazardous material inspection and enforcement duties. Esparza was instrumental in helping establish California Task Force 6 Urban Search and Rescue Team (USAR) in 1992. USAR is a Homeland Security asset for natural and man-made disaster responses. He is a certified Task Force Leader for the team and responded to the World Trade Center collapse and Hurricane Katrina.

Chief Esparza graduated from Cogswell Polytechnical College with a Bachelor of Science degree in Fire Administration and Fire Prevention Technology. He is a Certified Chief Officer by the State Fire Marshal. He is married to his high school sweetheart, Tammy, and has two children, Austin and Darin.