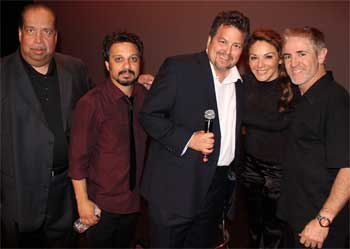 A group of prominent Latino comics announced plans to hold an “I AM 38” statewide comedy tour to raise awareness about education, specifically Proposition 38. The shows will be emceed by award-winning writer/performer Rick Najera, with performances by Johnny Sanchez (MadTV, Happy Feet), Carlos Alazraqui (Reno 911) and many others.

Proposition 38 is the initiative on the November ballot that restores cuts in California education K-12 and puts the money in the hands of local schools, not the politicians. www.iam38.org

“We are doing this comedy tour to draw attention to Prop 38, and highlight how important it is for our schools,” said Najera. “Jon Stewart and Stephen Colbert have proved that injecting humor into the political dialogue helps to draw the attention of younger voters. If, by doing this comedy tour we can inform members of the Latino community and others to support Prop 38, then we will have done our job.”

A portion of the proceeds from the shows will benefit the Redwood City Education Foundation & Redwood City Library Foundation, Latino Theater Company and SOLID Rhythm, an afterschool dancing program for underprivileged youth that provides a structured learning environment where kids can not only learn, but build valuable skills while having fun.