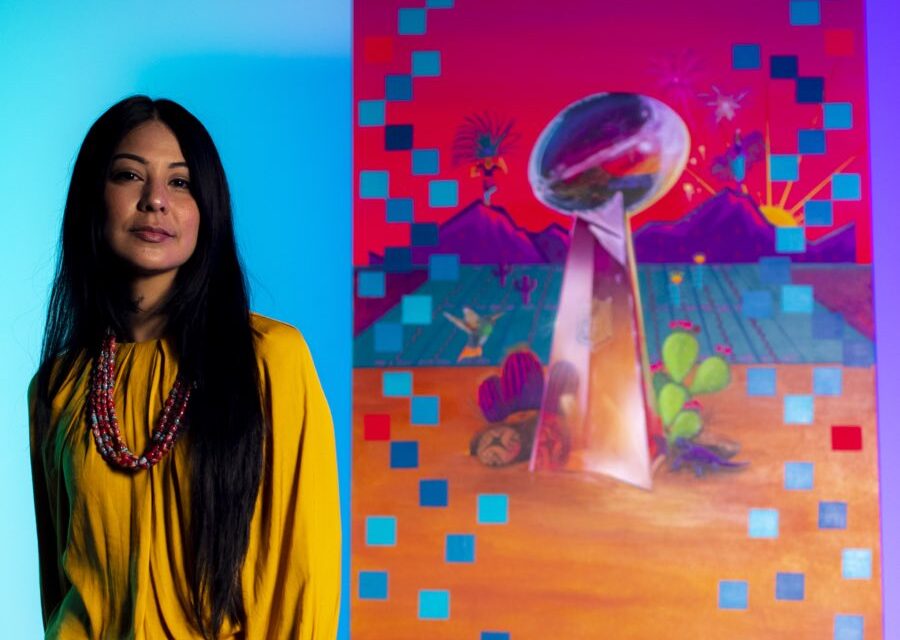 The NFL has partnered with artist Lucinda “La Morena“ Hinojos, the first Chicana, Native American artist to work with the league on Super Bowl theme art. She will be the marquee artist of Super Bowl LVII, designing an elaborate, deeply meaningful piece that will be featured on an array of design activations for the upcoming Super Bowl LVII in Arizona, including Super Bowl tickets, out-of-home (OOH) displays and more.

Born and raised in Phoenix, Hinojos, also known as “La Morena,” and her family have close ties to the community of Arizona. She embodies the spirit and history of the city. As a Chicana, Native American artist with multicultural roots from Mexico and the Pascua Yaqui, Chiricahua Apache, White Mountain Apache, and Pima (Akimel O’Odham) Tribes, she uses her unique identity and experience to design an intricate, emblematic piece of art that the NFL will proudly display throughout Super Bowl LVII.

“I create art to hopefully provide an element of healing, unity and real human connection, so with this Super Bowl piece, I hope people from all over the world can have a dialogue about what this painting means to them …and that’s what’s beautiful to me,” said Hinojos. “I’ve always thought that the Super Bowl ticket is the centerpiece of this hallmark event, and for me, as the first brown Indigenous woman to design the ticket’s artwork, it is amazing and something I’m very proud of.” 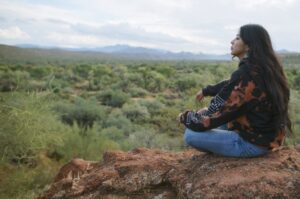 The art piece itself features multiple symbols that represent key parts of the culture and history in Arizona. Reflected on the Vince Lombardi Trophy are the White Tank Mountains, which can be seen behind State Farm Stadium, home of the Arizona Cardinals and Super Bowl LVII. In addition, on each side of the trophy, Hinojos depicts a Fancy Shawl dancer and an Azteca dancer to pay homage to the Indigenous tribes in Arizona. Her ultimate goal with her artwork is to unite and shed light on underrepresented communities of color in Arizona.

“Lucinda’s insight and direct, personal connection to the amazing and diverse history in Arizona made her the perfect partner for this project,” said MARISSA SOLIS, NFL SVP of Global Brand and Consumer Marketing. “She is a gifted artist, a football mom and a woman who authentically represents her Chicana heritage, and we are so thrilled to use Super Bowl as a platform to showcase her beautiful artwork and by extension, spotlight the local communities integral to Arizona.”

Another aspect of Hinojos’ partnership with the NFL is a massive mural she will paint in collaboration with Indige Design Collab of Cahokia Socialtech and Artspace, the Indigenous-led platform for creative peacekeeping, and fellow Native American artists Randy Barton of Diné/Navajo descent, Anitra “Yukue” Molina of Yaqui descent, and Carrie “CC” Curley of the San Carlos Apache descent. The team will collectively create the largest Super Bowl mural to date at 9500 square feet. Painted on the Monarch Theatre, the artwork is a symbol of Indigenous collaboration and emphasizes the narrative of community and unity. It will feature meaningful contributions representative of each artist’s respective backgrounds, including an Apache Woman, a Diné/Navajo rug pattern and more.

NFL partner Wilson is also collaborating with Hinojos on a football design. The ball is inspired by the progression of Lucinda’s own personal artistic journey and how important heritage and community are to her. The ball will be available for purchase online and at Super Bowl Experience at Phoenix Convention Center.The Super Bowl LVII will take place on Sunday February 12, 2023, at State Farm Stadium in Arizona, where a wide array of activations and experiences including Super Bowl Experience, NFL Honors, and more will take place throughout the week. The artwork created by Hinojos will also be showcased around the state, culminating in being displayed on the Super Bowl gameday tickets.

About Lucinda “La Morena” Hinojos
Lucinda Hinojos, who also goes by La Morena, is a visual artist and cultural organizer who is showcasing her Native American/Mexican roots and activism through her art. Her murals focus on the power of community, culture and current political issues, healing as well as the inspiration and guidance of her ancestors. She has been featured in Galleries, Museums and painted murals across the US and Internationally. Recently, she was personally invited by the US Embassy of France to paint in Marseille, France. In 2018 she launched “Colors of La Comunidad” an incubator for ‘artivismo’ which where artist can showcase their activism through art.

As a Chicana, Native American artist with multicultural roots from Mexico and the Pascua Yaqui, Chiricahua Apache, White Mountain Apache, and Pima (Akimel O’Odham) Tribes, Hinojos uses her unique identity and experience to design an intricate, emblematic piece of art. Born and raised in Phoenix, she and her family have close ties to the community of Arizona, and her Super Bowl painting features multiple symbols that represent key parts of the culture and history in Arizona, including a reflection of the White Tank Mountains on the Lombardi Trophy and depictions of a Fancy Shawl dancer and an Azteca dancer, which pay homage to the Indigenous tribes in Arizona.

Hinojos’ ultimate goal with her artwork is to unite and shed light on underrepresented communities of color in Arizona.

About Cahokia
Cahokia is a female-owned, Indigenous-led Social Tech + Art Space in downtown Phoenix. On the ancestral lands of the O’odham and Piipaash, Cahokia is an established enterprise between social entrepreneurs and community-based organizations whose mission is to support and revitalize underrepresented communities through capacity building, place-making, place-keeping, workforce training and collaboration.

About Indige Design Collab
The Indige Design Collab is a network of Indigenous designers and creatives working to cultivate visual and vocal discussions around Indigenous design perspectives, ecosystems, and continued way-of-life as they Indigenize Space. As creative professionals in the Southwest, brought together by design, they lean into their cultural norms of living between two worlds. It is between these realities they seek to bridge cultural ideas with place-based advocacy and the implantation of design principles. Their projects have collectively brought together 40+ indigenous designers who produce work to advocate for the Indigenous movement. They impact audiences through their entrepreneurial spirit, challenging themselves to be present, communicating their existence, and inspiring Indigenous resilience in the 21st century. Collectively, they test boundaries, create functional design, structure critical data, and influence others to bridge the gaps in social, economic, and justice systems.