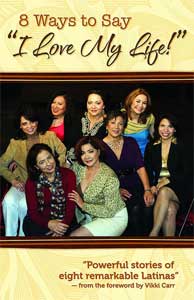 December 19, 2012 – On January 5th, 2013, the authors of 8 Ways to Say I Love My Life will travel to San Bernardino County to make a special presentation at the California Institution for Women (CIW) located in Chino, Calif. Seven of the eight writers including author Susan Orosco (“Latino Power: Seven Powers all Latinos Have Upon Which to Build an Empire”); producer and screenwriter Nancy De Los Santos Reza; Bel Hernandez Castillo (President/CEO, Latin Heat Media); motivational speaker Margo De Leon; communications specialist Laura De Anda; entrepreneur Joanna Ilizaliturri Diaz; and public health administrator Rita Mosqueda Marmolejo will each perform an eight-minute dramatic stage reading from a personally prepared monologue or from her chapter in the book. Actress Karina Noelle will perform on behalf of playwright/screenwriter/novelist Josefina Lopez (“Hungry Woman in Paris,” “Real Women Have Curves”), who will not attend due to a previously scheduled commitment.

Women are the fastest growing population of imprisoned Americans in the country. In fact, the female population in state and federal prisons combined has doubled in the last two decades. The majority of these women were victims of neglect, abandonment, and physical and sexual abuse as children, with histories of struggles as adults with domestic violence, physical, sexual and physical abuse and mental health issues. With facts like these, there is no doubt why over 160 inmates from CIW welcome the 8 Ways writers into their medium-security facility to hear the writers’ real-life stories and powerful life lessons that offer hope, inspire self-examination and promote self-acceptance.

8 Ways to Say I Love My Life is a collaboration intended to help women believe in the power of self-love and inner strength and celebrates the human spirit. Originally performed as monologues in 2009, the play received rave reviews from audiences and critics, and won the Imagen Award for Best Live Theatrical Production. The stage production was reprised in early November at Casa 0101 Theater & Art Gallery in Los Angeles to coincide with the release of the book by the same name. The book’s foreword is written by world-renowned singer and philanthropist Vikki Carr.

“When women open their hearts and share their stories, miracles happen,”
says Ana L. Nogales, Ph.D., president and clinical director of Casa de la Familia. These stories “need to be told, as they are so eloquently in ‘8 Ways to Say I Love My Life’, so that together we can actualize our dreams and love our lives.”

For more information on 8 Ways to Say I Love My Life, please visit: 8waystosay.com.