A Reporter Takes a Stand 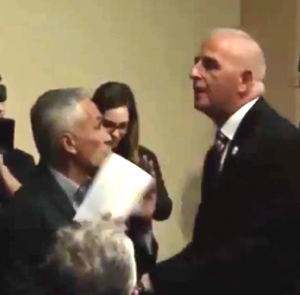 Jorge Ramos is a journalist and reporter who works with Univision and Fusion’s America placed a Presidential candidate on the spot the result was being physically removed from the press conference.

As a point of reference here is the text which protects the press:

Freedom of the press or freedom of the media is the freedom of communication and expression through mediums including various electronic media and published materials. While such freedom mostly implies the absence of interference from an overreaching state, its preservation may be sought through constitutional or other legal protections.

The United Nations’ 1948 Universal Declaration of Human Rights states: “Everyone has the right to freedom of opinion and expression; this right includes freedom to hold opinions without interference, and impart information and ideas through any media regardless of frontiers”

From his website:
Jorge Ramos is an immigrant. He came to the United States as a student in 1983. In November 1986, at age 28, he became one of the youngest national news anchors in the history of American television. Since then, he has been called “the voice of the voiceless” for other immigrants like him.

Ramos holds a degree in communication at the Ibero-American University in México City and has a Master’s degree in International Studies from the University of Miami. The University of Richmond gave him an honorary degree of Doctor of Letters in 2007.