Books | The Novel “The Weeping Woman” 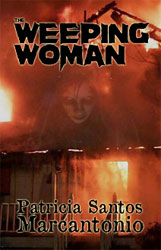 About the book
When children begin disappearing in San Antonio, Detective Blue Rodriguez discovers the case echoes an old Mexican ghost story, that of La Llorona, the doomed weeping woman seeking her lost babies. The detective must come to terms with her psychic visions of the dead and her troubled past to find the stolen children.

A former police reporter, Marcantonio said her parents first shared the story of La Llorona when she was a child as a warning to keep away from strangers.

“We lived a few blocks from a cemetery, so my cousins and friends would scare each other with sightings of La Llorona,”
she said. “The tale scared me then, but became an inspiration for me to become a writer, a storyteller.”

Marcantonio’s children’s book “Red Ridin‘ in the Hood” earned an Anne Izard Storyteller’s Choice Award and American Library Association Starred Review, and was named a Best Collection to Share – Wilde Awards. The University of Arizona Educational Theatre Company has also adapted stories from the book into a children’s play. Her screenplays have also hit the top percentage in several contests, including MORE Women in Film, Screenwriting Expo 5, Women in Film Las Vegas and the Phoenix Film Festival contest.