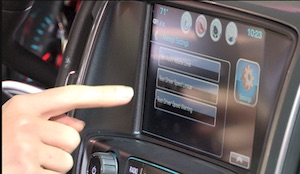 In this exclusive Hispanic Lifestyle video segment, we talk with General Motors spokes person Nicole Clare about the teen safety features found in several of their vehicles.

TEEN DRIVER SAFETY
Parents know that coaching a teenager on how to learn safe driving skills is vital. According to the Insurance Institute for Highway Safety, in the United States, the fatal crash rate per mile driven for 16- to 19-year-olds is nearly three times the rate for drivers ages 20 and over.

The all-new 2016 Chevrolet Malibu will debut Teen Driver, a system that provides parents with a tool to help encourage safe driving habits for their kids, even when they are not in the car with them. Teen Driver supports safe driving habits by muting the audio of the radio or any device paired with the vehicle when front seat occupants aren’t wearing their safety belts, and it gives audible and visual warnings when the vehicle is traveling faster than preset speeds.

This feature is the first in the industry with a built-in system that lets parents view on a display how their teenager drove the vehicle. Maximum speed reached, distance driven and number of times active safety features were engaged all can be confirmed.

“We developed this system so parents could use it as a teaching tool with their kids – they can discuss and reinforce safe driving habits,” said General Motors safety engineer MaryAnn Beebe. “As a mother of two, I know anything that has the potential of keeping one’s family safer is of great value to parents.”

Malibu can keep track of the following:

To use Teen Driver, a parent needs to enable the feature by creating a PIN in the Settings menu of their available MyLink system, which then allows them to register their teen’s key fob. The system’s settings are turned on only to registered key fobs.

When active, Teen Driver automatically mutes the radio until front safety belts are fastened. Additionally, the radio system’s maximum volume can also be set to a lower level. If the vehicle is equipped with active safety features like Forward Collision Alert, they are automatically turned On. Parents can select a maximum speed (between 40-75 mph), which, if exceeded, activates a visual warning and audible chime.

If equipped, these are the safety features that are automatically turned On and incapable of being manually turned off when Teen Driver is activated:

“The first step with this technology is to make sure that all drivers and passengers within the car are safe,” said Steve Majoros, Chevrolet car marketing director. “In addition to innovative safety technologies like this, you will see efficiency, advanced connectivity and stunning design in the 2016 Malibu.”

Teen Driver is not a subscription-based service, so it remains with the vehicle permanently and will be standard on the Premier trim and optional on LT models if equipped with the Convenience Package and up-level radio. The 2016 Malibu debuts at the New York Auto Show in early April and is expected to go on sale at the end of 2015.