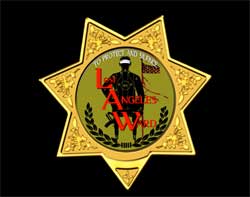 Lost Angeles Ward takes a hard look at life in the sometimes glamorous but always gritty Los Angeles California to reveal the stories overlooked when the silver screen goes blank and Hollywood -the capitol of illusions- clashes with the endless supply of ever pumping lost souls- made of young and old, rich and poor- whose journey into the Ward came at price. Beyond the Hollywood glitz and glamour lies a graveyard of lost souls and fallen angels.  www.LOSTANGELESWARD.com

RICHARD MONTES born and raised in Los Angeles, California, holds a Masters Degree in Film Production from Chapman University and a Bachelors Degree in Film and Electronic Arts from Cal State University Long Beach. PASS THE MIC! a critical and hard-hitting 60min documentary marked his directorial debut. He has traveled the world with this film, having screened at LAMC Toronto Canada, Alucine Film Festival in Canada, New York H2O Film Festival, Vistas Film Festival at the Angelika Theater in Dallas Texas, Cine Sol traveling film festival and Vancouver Hip-hop Film Festival. He is the director and co-creator of Lost Angeles Ward.  www.RICHARDMONTES.com

JADE PUGA— a native of Texas holds a Bachelors Degree from University of Southern California in Theater Arts, and a minor in Cinema. She is an actress and filmmaker her films have screened in film festivals in the United States, Canada, and Europe. She is the co-founder of Safada Y Sano Productions, LLC and the Co-Creator and Star of LOST ANGELES WARD.  www.JADEPUGA.com

SAFADA Y SANO PRODUCTIONS, LLC is a multimedia production company formed in 2002 based out of Los Angeles, CA. Formed by Richard Montes and Jade Puga, Safada Y Sano Productions focuses on bringing raw, entertaining, in your face stories to audiences. S Y S Films have screened in film festivals and university screenings around the globe including AFI’s Music Documentary Series and Cannes. Their feature length documentary Pass the Mic! was released in North America by Image Entertainment. Their latest project is the webseries LosT Angeles Ward and the feature narrative film A-Guruphobia.  www.SYSFILMS.com

**FILMMAKERS AND ACTORS WILL BE INATTENDANCE ** more on the event www.REELRASQUACHE.ORG