Marcelo “Marcelinho” Tieppo Huertas (born 25 May 1983) is a Brazilian professional basketball player who currently plays for the Los Angeles Lakers of the National Basketball Association (NBA). He is also member of the senior men’s Brazilian national basketball team, and holds Italian citizenship.

From the Los Angeles Laker website
The Brazilian native began his professional playing career in his home country for three seasons (2001-2004) before signing with Joventut of the Spanish ACB League, where he played three seasons (2004-2007), winning the 2006 FIBA Euro Cup. He remained in the ACB League for the 2007-08 season, which saw him garner an All-ACB Team selection with Bilbao Basket, before joining Fortitudo Bologna in Italy’s top domestic league for the 2008-09 campaign. “Marcelinho” returned to the ACB League with Saski Baskonia from 2009-11, where he won the 2009-10 Spanish National Championship, and in 2010-11 won the Euroleague’s weekly MVP award two times and led the ACB with 5.9 assists per game en route to a second All-ACB Team selection.

Exclusive photos taken by Richard Sandoval from the Los Angeles Lakers shoot around at the tribal recreation center on the Pechanga Reservation near Temecula California. 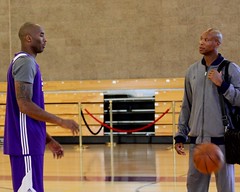 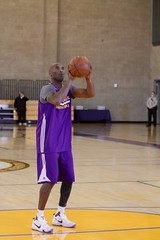 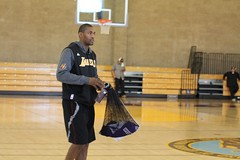 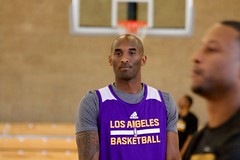 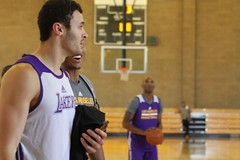 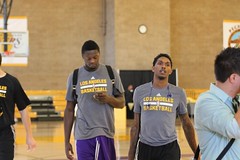 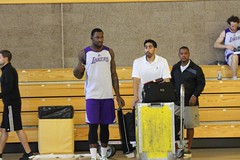 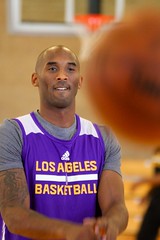 Before joining the Lakers, Huertas spent the previous four seasons (2011-15) with Spanish power FC Barcelona, where he was a key piece on their 2011-12 and 2013-14 Spanish National Championship and 2013 Spanish National Cup-winning teams.

Additionally, the 32-year-old has extensive international experience, notably as a member of the Brazilian national team for the 2012 Olympics in London, where he led the squad with 6.0 assists per game in addition to 11.3 points, good for second-best on the roster. He has also appeared on three consecutive FIBA World Championship (renamed FIBA Basketball World Cup) teams in 2006, 2010, and 2014. His decorated international resume includes gold medals from the 2006 South American Championship (where he was named MVP of the tournament after averaging a team-leading 16.8 points to go with 4.0 assists) and 2007 Pan American Games, in addition to three medals from the FIBA Americas Championship: 2005 and 2009 (gold), and 2011 (silver).