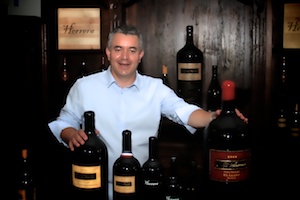 Mi Sueno Winery operated the Rolando Herrera is being recognized as a company that has Survived and Thrived.  Wells Fargo Bank is the presenting sponsor of Hispanic Lifestyle’s 2014 Business Expo and Conference to be held on August 6, 2014 at the Ontario Airport Hotel and Conference Center.  Mi Sueno Winery and other Latino Business Owners will be honored during the lunchtime program.

My life (Rolando Herrera)  in the wine business began humbly as a dishwasher at Auberge du Soleil. Several years later I would move onto Mustards Grill as a line cook. While neither job would ever be mistaken as the foundation for a career in winemaking, it was during these early years that I learned to appreciate the magic that is created when you pair beautiful cuisine with exceptional wine.

In 1985, at the age of 17, I accepted a summer job working for Stag’s Leap Wine Cellars. Ironically my first job had little to do with wine; I was hired as a laborer to help build a stone wall around the home of Warren Winiarski. Not long after, he would offer me a job working harvest under the condition that I would attend school in the morning.

Over the next 20+ years my journey through the ranks of winemaking would lead to: