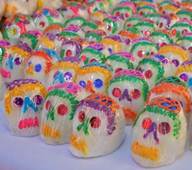 Actor Henry Darrow joins us for a book signing as special screenings of his popular television shows Zorro and The High Chaparral take place throughout the day on Saturday, September 15. Also, a Latino author panel discussion and a Mata Ortiz pottery sale complete the day’s activities. On Sunday, September 16, children and their families will enjoy panning for gold, gallery tours, a hands-on craft activity to take home, and a jam session by the Western Music Association.

On September 23, the GO WEST Reading Series presents Matt Garcia’s From the Jaws of Victory: The Triumph and Tragedy of Cesar Chavez and the Farm Worker Movement. Garcia’s gripping account of the expansion of the union’s grape boycott reveals how the boycott, which UFW leader Cesar Chavez initially resisted, became the defining feature of the movement. In October, the Autry prepares for its annual ¡Vivan Los Muertos! Day of the Dead celebration by showcasing the sweet traditions associated with the event. On Sunday, October 14, decorate your own sugar skull and pan de muerto, part of the monthly Latino Arts and Culture Day held every third Sunday of the month. For more information, visit the event page: theautry.org/series/latino-heritage-month

“What Is a Western?” Film Series

Directed by Rouben Mamoulian. Starring Tyrone Power, Linda Darnell, and Basil Rathbone. Diego Vega (Tyrone Power), a gifted equestrian and swordsman, returns to his native California, which is under the rule of an evil government official. Although he acts like a typical aristocrat, Vega secretly sets about defending the common people as the masked avenger Zorro. The final, climatic swordfight is one of the best swashbuckling sequences ever filmed.

Latino Heritage Day Screenings of Zorro and The High Chaparral

Our special guest, actor Henry Darrow, one of the first Latino actors to appear in popular television series and the first Latino actor to portray Zorro, will greet fans and present his book,Henry Darrow: Lightning in the Bottle (2012). On what happens to be his birthday, the trailblazing Latino actor will highlight his seventy years of life on stage and screen and share anecdotes from his time as Manolito Montoya in The High Chaparral. The book will be available for purchase in the Autry Store.

“Henry survived and had a career when, if you were Latino, you couldn’t be just good. You had to be beyond great, and that’s Henry,” said noted writer/entertainer Rick Najera.

Saturday, September 15, 2:00–4:00 p.m.
Museum Admission Rates Apply / Free for Autry Members
Through the works of over thirty authors and spanning sixty years, Latinos in Lotusland: An Anthology of Contemporary Southern California Literature brings to life the complex and diverse group of Latinos who inhabit Los Angeles. Join us for a panel discussion moderated by the editor of the anthology, Daniel Olivas, and featuring contributing authors Sandra Ramos O’Briant, Estella Gonzalez, Lisa Alvarez, Melinda Palacio, and Michael Jaime-Becerra. Following the panel discussion, hear about the new works of Melinda Palacio, Michael Jaime-Becerra, and Daniel Olivas. Includes a book signing and reception.

Mata Ortiz Show and Sale at the Autry Store

Saturday, September 15, 10:00 a.m.–4:00 p.m.
Free Admission
Join us for the annual Mata Ortiz pottery sale, part of Latino Heritage Month at the Autry. The Mata Ortiz Pueblo has revived the ancient traditions of Mesoamerican pottery, creating outstanding hand-coiled pots for decades. Choose between hundreds of different pots with both traditional and contemporary designs.

This month the Autry celebrates the generations of Latinos who have influenced and enriched the American West. Visit our Cowboy Gallery to learn about vaqueros and make a special vaquero-inspired craft.

From the Jaws of Victory: The Triumph and Tragedy of Cesar Chavez and the Farm Worker Movement is the most comprehensive history ever written on the meteoric rise and precipitous decline of the United Farm Workers, the most successful farm labor union in United States history. Based on little-known sources and one-of-a-kind oral histories with many veterans of the farm worker movement, this book revises much of what we know about the UFW. Matt Garcia’s gripping account of the expansion of the union’s grape boycott reveals how the boycott, which UFW leader Cesar Chavez initially resisted, became the defining feature of the movement and drove the growers to sign labor contracts in 1970. Garcia vividly relates how, as the union expanded and the boycott spread across the United States, Canada, and Europe, Chavez found it more difficult to organize workers and fend off rival unions. Ultimately, the union was a victim of its own success and Chavez’s growing instability.

As the Autry prepares for Day of the Dead festivities later in the month, members and visitors are invited to come learn about the various preparations and sweet traditions associated with Day of the Dead. Activities include decorating sugar skulls and pan de muerto.

Save the Date for ¡Vivan Los Muertos!

Join us as the Autry celebrates the Day of the Dead, an ancient Aztec ritual to both remember the dead and mock death itself. Discover the extraordinary observances that take place during this celebration of life while enjoying traditional food, family activities, gallery tours, vibrant music and dance, elaborate altar displays, and a community altar. View video of last year’s celebration here: http://youtu.be/qD8pAz8LatY

About the Autry National Center

The Autry is an intercultural history center dedicated to exploring and sharing the stories, experiences, and perceptions of the diverse peoples of the American West. Located in Griffith Park, the Autry’s collection of over 500,000 pieces of art and artifacts, which includes the collection of the Southwest Museum of the American Indian, is one of the largest and most significant in the United States. The Autry Institute includes two research libraries: the Braun Research Library and the Autry Library. Exhibitions, public programs, K–12 educational services, and publications are designed to examine the contemporary human condition through the lens of the historical Western experience and explore critical issues in society.

The museum, store, and cafe are closed on Mondays except for Martin Luther King Jr. Day and Presidents’ Day.

Museum admission is $10 for adults, $6 for students and seniors 60+, $4 for children ages 3–12, and free for Autry members, veterans, and children age 2 and under. Admission is free on the second Tuesday of every month.