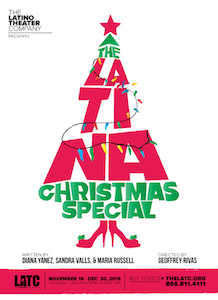 Deck the halls with guacamole! Fa, la, la, la, la, la, la, la, la! ’Tis the season to be jolly! If you think your holidays with relatives were dramatic, then fasten your seat belts for a new holiday entertainment coming your way! Family Christmas stories of holidays past will come to life as the Latino Theater Company (LTC), operators of the Los Angeles Theatre Center (LATC) present The Latina Christmas Special created by Diana Yanez, written by and starring critically acclaimed Latina comediennes Diana Yanez, Sandra Valls and Maria Russell under the direction of Geoffrey Rivas, to be presented at the Los Angeles Theater Center, 514 South Spring Street (between West Fifth Street and West Sixth Street – Historic Core/Downtown LA), Los Angeles, CA 90013. Discounted Previews will be presented on Thursday and Friday, November 19 and 20, 2015. The play will have a Five-Week from November 21 (Press Opening Night) – December 20, 2015.

In The Latina Christmas Special three first generation Latinas get together to dish about everything from moms to cucarachas to Farrah Fawcett in a no holds barred evening holiday soirée as they relive some of their very personal Christmas stories (and fantasies) of holidays past shared with families and loved ones. The show is a series of holiday memories told through the eyes of three comedic actresses: Diana Yanez, a Cuban American from Miami (of Hollywood; Margaret Cho’s The Sensuous Woman), Sandra Valls, a Mexican American from Laredo, TX (of Altadena; Showtime’s Latin Divas of Comedy), and Maria Russell, the daughter of an over-dedicated Mexican mother and a compliant Lithuanian father (of Studio City; FX’s It’s Always Sunny in Philadelphia) helmed by director Geoffrey Rivas, founding member of LTC (of Culver City; director of the NAACP award-winning solo show Beautiful; selected acting credits include La Bamba, CSI – Las Vegas, TNT’s Murder in the First).

Director Geoffrey Rivas said, “I saw The Latina Christmas Special in 2014 because I wanted to support my fellow actor Maria Russell. I had such a good time I went back the next night to confirm my gut feelings. This show had much more potential to reach a wider and more diverse audience, which we could achieve by bringing it to the Los Angeles Theatre Center. I approached the three ladies in the cast (Diana Yanez, Sandra Valls and Maria Russell) to inquire where they wanted to go with this show and I shared my thoughts and ideas of moving the show and making some changes to it. Much to my surprise they liked what I had brought to the table and thus here we are today. I am hoping that these stories touch each and every audience member on different levels, culturally and spiritually, and that they see what beautiful traditions we have of our own within the Latino community.”

More About The Latina Christmas Special:
The Latina Christmas Special received its World Premiere performance on Thursday, December 12, 2013 at The Elephant Theatre Company in Hollywood, CA produced by Atomictuna Productions and Combined Art Form, where it played for four Sold Out performances with a cast including Diana Yanez, Sandra Valls and Maria Russell. The show received its second production with the same cast a year later in December 2014 when it played at the Theatre Asylum in Hollywood, CA for nine Sold Out performances, again produced by Atomictuna Productions and Combined Art Form. Creator Diana Yanez says, “To me The Latina Christmas Special is the little show that could. Each year since we started our show has grown significantly. Now, this year, in 2015, we are thrilled to have the Latino Theater Company presenting our show for 20 performances in a new fully realized staged production under the direction of the wonderful Geoffrey Rivas.”

Discounted Tickets for Preview Performances on Thursday and Friday, November 19 and 20, 2015 are $20 each. Tickets for performances during the play’s Five-Week Run from November 21 – December 20, 2015 are $30 each for General Admission, $22 each for Students, Seniors and Veterans, and $20 each for Groups of 10 or more. The show is recommended for age 13+. Advance reservations are highly recommended. Please visit www.thelatc.org for a complete performance schedule.

For patrons who may wish to see multiple shows at LATC, a Mid-Season Flex Pass is available for $40 each, enabling the ticket buyer to receive one ticket to two separate shows in the Fall 2015 LATC Season (57 Chevy and The Latina Christmas Special), plus reserved seating at the Cathedral of Our Lady of the Angels for La Virgen de Guadalupe Dios Inanztin on December 3rd or 4th. Mid-Season Pass Holders also receive 10% off all items at the LATC Bar. (Reserve tickets 48 hours in advance to guarantee seating. Non-Reservation walk-ups are subject to availability.)