2020 Latina of Influence | Susana A. Mendoza – State Comptroller of Illinois 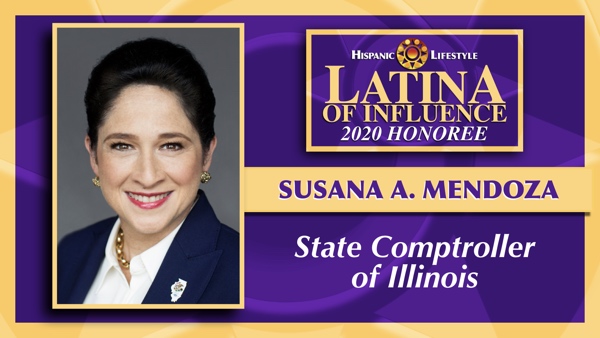 Comptroller Susana A. Mendoza is Illinois’ first Hispanic independently elected to statewide office and in two short years transformed the office, shifting the priorities back to funding nursing homes, hospice centers, schools and the state’s most vulnerable. As Illinois Comptroller, Mendoza brought the same tenacity, passion, and creativity that she always exhibited throughout her career in public service. A tested and proven executive officer, Susana is uniquely qualified to help the State get itself back on track financially in a way that doesn’t put the burden on the backs of the working-class families that make Illinois such a great place to live.

She is an independent, truth-telling, fiscal watchdog that prioritizes both the fiscal and moral health of the State. Mendoza has worked to enhance the overall internal control environment of the State to run a more effective, transparent and efficient office.

As the state’s Chief Fiscal and Accountability Officer, Susana has championed greater transparency in the State’s fiscal accounts. Her historic hallmark transparency reform legislation, the Debt Transparency Act, passed over the governor’s veto, requires state agencies to report monthly, rather than only once a year, their accrued liabilities as well as late payment interest penalties associated to those liabilities. Building upon that success, she spearheaded the Truth in Hiring Act to ensure that future governors present honest budgets that accurately reflect the size and cost of their staff. Mendoza is laser-focused on shining a greater light on the State’s finances in order to best protect how taxpayers’ dollars are spent, provide greater accountability and set the State on a better path towards responsible cash and debt management.

Prior to her statewide election, she made history by becoming the first woman ever elected as Chicago City Clerk. Under Mendoza’s leadership, more than 1.3 million Chicago City Vehicle Sticker customers were shifted from an inefficient and archaic seasonal sales program to Year-Round Sales. The new system, modeled after the Illinois Secretary of State’s license plate renewal program, resulted in millions of dollars of new revenue and vastly improved customer service at a lower cost to taxpayers. The program was awarded a 2015 “Bright Idea Award” from Harvard University. As City Clerk, Mendoza also took on the puppy mill industry, successfully authoring and passing a City-wide ban on the sale of dogs, cats and rabbits in pet stores unless they are sourced from humane shelters or rescue organizations.

Prior to her service as City Clerk, Mendoza served six terms between 2001 and 2011 as a Democrat in the Illinois House of Representatives. Starting as the youngest member of the 92nd Illinois General Assembly, she quickly earned a reputation as a tenacious and effective legislator, who stood out for her bipartisan approach to governing. Mendoza was routinely recognized for her leadership in the areas of social services, education, law enforcement, job creation and animal welfare.

Mendoza served as Co-Chairperson of the Conference of Women Legislators and has served three times as a delegate to the Democratic National Convention. She is a co-founder of the Illinois Legislative Latino Caucus.
In 2004, Mendoza was named one of Crain’s Chicago Business Magazine’s “40 Under 40” and in 2011 she was highlighted again in the magazine’s “Women to Watch” series. She was listed in Chicago Magazine’s March 2016 “Power 50” edition and was profiled in their July 2017 issue as “A Woman on Fire.” Mendoza was listed as one of “18 to Watch in 2018” by Politico and most recently, highlighted in Governing Magazine for her role in managing Illinois through its fiscal crisis.

Mendoza has been part of the US Department of State’s Professional Speaker’s Program, which aims to promote democracy and leadership across the globe, in places like Uganda, Tanzania, Mexico, Peru, Brazil, Venezuela, and Chile. She was also Chairman of the Illinois International Trade and Commerce Committee.
In 2010, Mendoza was selected by the National Conference of Women Legislators, at the behest of the US Secretary of State, to serve as one of only seven elected women representing the United States as an international observer of the Iraqi elections in Baghdad.

Mendoza is happily married and lives in Chicago’s Portage Park neighborhood with her husband David and their five-year-old son. She is a foodie, a soccer fan (and former collegiate soccer player) and occasionally loves jumping out of perfectly fine
airplanes.

Dear Richard,
I have selected to nominate State Comptroller Susana Mendoza because I have had 2 years of closely observing & seeing her warrior heart for people who need & deserve to be respected & supported. In all of my years I have never seen a politician, but especially one who has had to fight so hard for each position do as much as she has & won some great battles. You don’t normally hear the great stories of what is being done correctly or hoe someone got a horrible financial state from a $17b debt down to $6.4b & made sure that the non-profits or small businesses that were not being paid & were struggling to survive would receive their late payments from the state. Every year she hosts a holiday brunch for seniors at a church on the westside of Chicago she brings gifts, a chef with his team for a phenomenal meal, & other sponsored goodies so that they can have a wonderful experience. I wish more people would step forward to support our Latinas that are in office or brave enough to run. I am honored & amazed to know her.