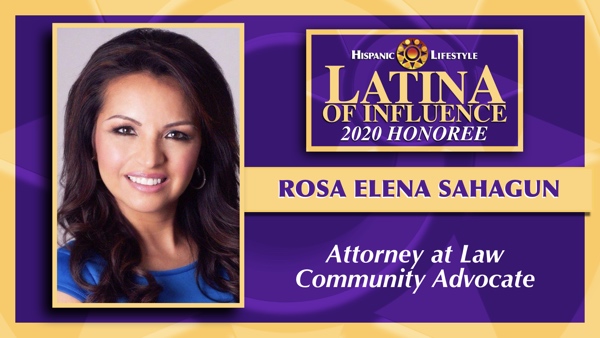 Hispanic Lifestyle is pleased to recognize Attorney at Law and Community Advocate, Rosa Elena Sahagun as a 2020 Latina of Influence. Ms. Sahagun along with our entire list of 2020 Latinas of Influence are invited to participate in Latina Conference taking place April 1 and 2, 2020 in Ontario, California

Rosa Elena’s activism in her community has always been at the forefront of her own values. Rosa Elena is a 1 of 9 siblings and is a first-generation college student. She attended high school in Santa Ana, CA and later enrolled in Chapman university where she earned her bachelors degree. She also revived her Juris Doctorate from Chapman after graduating from their law school.

After working for a firm for a few years, Rosa Elena decided to open up her own practice in Riverside, CA. This is where she established herself as a community leader through her own efforts. She began offering free legal clinics for anyone who had questions about any legal matter. She also held yearly toy and food drives around the holidays to give back to those in need. These food drives continue to this day. In 2018 she formed the Club Rosario Sin Fronteras, where she continues her community outreach. Many of the members of the Sin Fronteras Rotary Club are local small business owner whom have been inspired by Rosa Elena’s work in the community. The Rotary club not only services the Riverside community, but also various cities in the Coachella Valley.

In summary, Rosa Elena is being nominated for her leadership and love for her community. Rosa Elena leads with her positive attitude and her ability to inspire other around her.

Rosa Elena Sahagun has been such an important and influential member of the Inland Empire Community for so long. She always shares her talent, advice, counsel, legal services with the utmost quality and professionalism. She gives back unconditionally, unselfishly and from the corazon to help others.
While she is immersed in a thriving law practice which takes on challenging immigration issues and cases and while she is involved in may worthy community causes she still finds time to give to additional organizations like the Inland Empire Latino Lawyers Association, the RCC Puente Program, Rotary Club, the farming community and many others. At the drop of a hat she is willing to share her story with youth as she has a passion for the education of our Latino youth. I am truly hopeful that she is a recipient of your annual Latina of Influence Award.  Art Alcaraz School of Business University of California, Riverside

Dear Hispanic Lifestyle –Latinas of Influence Committee:
I am writing this letter to submit my official nomination of Attorney Rosa Elena Sahagun founder of Sahagun Law. It is my belief that Attorney Sahagun is a deserving recipient of this recognition for her work in defense of immigrant, undocumented and marginalized communities in the Inland Empire. From the the courthouse in the City of Riverside to the agricultural fields of the Coachella Valley Attorney Sahagun demonstrates a commitment to help the communities with the most need. Attorney Sahagun has a track record of advocating for the communities that have had their voices muted by injustice and fraud. One specific case that I would like to highlight is a case that Attorney Sahagun dedicated two and a half years of her career to secure justice. Attorney Sahagun was lead counsel on defending immigrant and minority owned small business owners that were targeted in a fraud scheme by Attorney Rogelio Morales and his wife Mireya Arias. In her commitment to defend these small business owners she became the target of harassment, stalking and threats by Rogelio Morales. Despite the threats Attorney Sahagun continued defending the victims of Rogelio Morales and coordinated efforts for media outlets to become aware of his attacks against vulnerable communities. In the end Attorney Sahagun’s efforts prevailed and justice was served, many of her clients experienced justice for the first time thanks to her efforts.

In addition to her legal defense efforts, Attorney Sahagun also heads humanitarian efforts for agricultural farm workers and their families in the Indio, El Centro and Coachella Valley. She coordinates tax clinics for farm workers during tax season in order to stop the fraudulent schemes of unscrupulous “tax prepares”. When she found out about the tax fraud schemes against farm workers she immediately went into action and began protecting them. Moreover, every Christmas season her law firm provides holiday gifts for the children of farm worker families.

Moreover, as an immigration law expert she is called upon by television, radio and online streaming channels to provide legal advice to viewers, listeners and followers. What makes her special is that she is willing to share her depth of knowledge with as many audiences at no cost, she only cares that our communities are protected. Hence, she coordinates community forums and opens it to community members in need. These are It is for all these reasons and more that I humbly ask the Latinas of Influence committee select Attorney Sahagun as a recipient.
Sincerely,
Sinar Lomeli Counselor-MiraCosta College