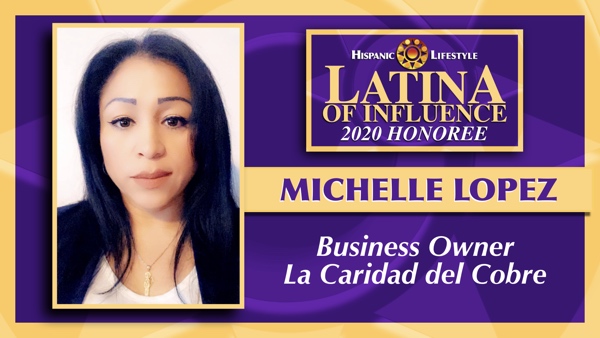 Hispanic Lifestyle is pleased to recognize Business Owner, La Caridad del Cobre Michelle Lopez as a 2020 Latina of Influence. Ms. Lopez along with our entire list of 2020 Latinas of Influence are invited to participate in Latina Conference taking place June 2, 2020 in Ontario, California.

Michelle is not your “typical” business owner perse. She is a woman that has overcome great personal struggles and has persisted in life (and business) against all odds.

Michelle was born in Mexico, Distrito Federal on July 2, 1972. She is the fifth child in a family of ten children. Her family was in such dire economic strains that food scarcity was part of her daily reality—especially given the number of children that needed to be fed. Oftentimes, the family literally went without food for days.

The harsh realities of her life led her to find refuge in undesirable company where she was introduced to alcohol and drugs. Soon enough, this lifestyle consumed her spirit and she became an addict.

But in 1994, she decided to start anew and pursued a fresh new life start by migrating to the United States. It was upon her arrival to California that she seemed out support from Alcoholics Anonymous and leave the use of substances behind—she is now 19 years sober. In fact, she has become a strong leader in the AA community, and has single-handingly helped thousands of people’s lives back to sobriety.

Her journey into the business world has been a difficult one, but one that she has leaped into with spiritual faith and outmost loving spirit. She first started as a street vendor, selling tamales and elotes without the formalities of permits, because she didn’t know any better. She tried to expand her business by selling flowers on special occasions like Mother’s Days and Valentines—and saved the extra work money because she dreamed of opening up a florist shop.

With the guidance of a Wells Fargo’s small business consultant, she got a loan, applied for a business license and was able to open the doors of “La Caridad del Cobre” in 2012.

All along, Michelle has been a philanthropist, teaching other women about starting their own small businesses, at times even gifting them funds to get started. She has a particular interest in supporting addicts who are ready to start a new life or women who are victims of domestic violence and want to be free from abusive environments—like one in which she was exploited for 15 years!!

Michelle is a brilliant business woman, who now employs her family and a few others in her successful small business. She is a dynamic woman who transforms lives on a daily basis with her powerful story, her loving ways and her involvement in a community that is usually one that is not talked about publicly as are addicts and victimized women.

I would like to nominate MICHELLE LOPEZ for the Latina of Influence Award. Michelle is a small business owner in Orange County. She is the owner of a botánica and florist called “La Caridad del Cobre” in Plasencia, CA.