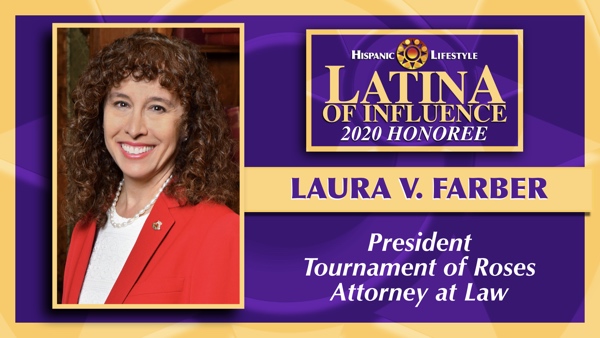 Hispanic Lifestyle is pleased to recognize President Tournament of Roses and an Attorney at Law Laura V. Farber as a 2020 Latina of Influence. Ms. Farber along with our entire list of 2020 Latinas of Influence are invited to participate in Latina Conference taking place April 1 and 2, 2020 in Ontario, California.

Tournament of Roses® President Laura V. Farber provides leadership for the 131st Rose Parade® and the 106th Rose Bowl Game® on January 1, 2020. Farber has been a volunteer member of the Tournament of Roses Association since 1993. She was appointed a Tournament Chairperson in 2004 and a Tournament Director in 2010. Throughout her extensive Tournament career, Farber has served on and chaired various committees including Decorating Places, Formation Area, Judging and Membership Development. She was elected to the Executive Committee in 2012.

She has been named one of the top 50 women lawyers in Los Angeles and featured in the Los Angeles Business Journal. In 2003, she received the American Bar Association’s Commission on Ethnic and Racial Diversity in the Profession – Spirit of Excellence Award and, in 2004, she received the YWCA San Gabriel Valley Women of Excellence in the Law Award.

Farber and her husband, Tomás Lopez, reside in South Pasadena and have two children, Christopher and Jessica. Her hobbies include music, tennis and reading.