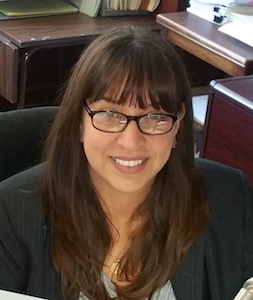 Cynthia Hernandez currently serves as the Chief Attorney for the Office of the Independent Monitor for the Los Angeles County Probation Department where she is responsible for conducting independent reviews of employee misconduct investigations and officer-involved shootings. Before her work with the Probation Department, she joined the Office of Independent Review in 2008, monitoring the Los Angeles County Sheriff’s Department and provided oversight of internal affairs investigations, reviewed and consulted on use of deadly force incidents, inmate deaths and significant force investigations. Cynthia previously practiced as an attorney representing labor unions for the firm of Gilbert & Sackman and was a trial attorney at the National Labor Relations Board. She also spent several years at the United Nations International Criminal Tribunal for Rwanda as a criminal defense attorney for trials stemming from the war crimes and atrocities that occurred in Rwanda in 1994.

Cynthia received her J.D. from the University of Southern California and her BA from U.C. San Diego. She has attended the Universidad de Guadalajara in Mexico and the University of Nairobi, Kenya and received an M.A. from the Claremont Graduate School. She was a bilingual teacher before becoming an attorney. She speaks Spanish and Swahili.

EDUCATION
UNIVERSITY OF SOUTHERN CALIFORNIA LAW SCHOOL
Juris Doctor, May 2000-Licensed to practice in the State of California

OFFICE OF THE INDEPENDENT MONITOR. Los Angeles Probation Department
Chief Attorney May 2014 to present
Attorney October 2010 to May 2014
Conduct reviews and audits of the Los Angeles County Probation Department’s internal/administrative processes. Identify systemic deficiencies/inefficiencies and policies gaps and provide recommendations for reform. Provide counsel regarding risk management issues. Monitor internal affairs investigations to ensure that allegations of employee misconduct are investigated in thorough, fair and effective ways. Assist the Department with compliance requirements imposed by various external agencies, including the US Department of Justice. Advise the Department on labor, employment, union and other legal matters. Draft reports (confidential and public) and work with Department personnel/managers on implementing plans designed to improve business practices. Manage and track implementation plans and reform measures designed to increase effectiveness and efficiency. Provide trainings regarding laws and better business protocols. Manage the operations of the unit.

INDEPENDENT CONSULTANT, Fullerton Police Department, CA
Attorney July 2011 to July 2012
Performed a review of a highly publicized in-custody death to determine whether any of the involved officers violated policies of the Department. Examined policies/practices and provided recommendations intended to improve on those policies and practices.

ARIZONA STATE MUSEUM
Archaeological Assistant Summer 1996
Homol’ovi Research Program, Winslow, Arizona. Assisted in the collection, mapping, and recording of artifacts used in the litigation of land disputes between the Hopi and Navajo Indians.

PEACE CONFERENCE IN MOSCOW, USSR May 1986
Delegate to the First Soviet/American Women’s Peace Conference in Moscow