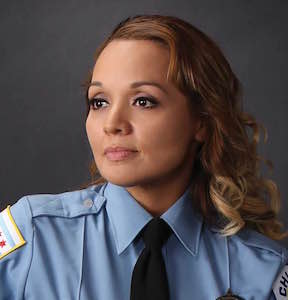 Lourdes Nieto is a Police Officer with the Chicago Police Department who also lives out her love for acting and the performing arts. I am also the owner of Chicago’s Heavenly Sweet Creations, a candy and pastry buffet table boutique that services the Chicagoland area. Fighting Human Trafficking is my calling and I incorporate it in every aspect of my life, being a part of Traffick Free, a faith-based organization that seeks to provide Chicago with tools and sustainable programs to combat human trafficking and supporting the Salvation Army’s Stop-It program benefiting Anne’s House, one of the few residential homes in the country to offer support for sexually exploited young women.

Nomination submitted by her Daughter

My name is Victoria Perez and I would like to nominate my mother, Lourdes Nieto as one of the 2016 Latinas of Influence. I know that not only would she be delighted to be nominated but would be ready and willing to attend the conference and be listed.

She is a single mother, a Chicago Police Officer and an anti-human trafficking instructor, advocate and philanthropist. She uses her title of police officer to conduct information sessions about human trafficking in our neighborhood of Pilsen, a predominantly Latino neighborhood and works incisively as part of the anti-human trafficking community in Chicago. Her work has been covered by several news media outlets as she works hard to raise awareness and push for change in training requirement for law enforcement. She’s my mom, my hero, my best friend and a Latina of Influence!