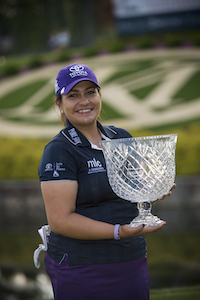 A native of Azusa in Southern California, Lizette Salas is living her dream of being a Champion on the LPGA Tour. With 11 top-ten finishes in her brief career on the tour, Lizette is 10 in the Rolex Women’s World Golf Rankings. She made a splash in the golf world as soon as she turned professional, after graduating from USC, and found herself in contention to win the 2011 U.S. Women’s Open. Salas went on to post two top ten finishes in seven Futures Tour events and earned her LPGA card with full exemptions at the Final Qualifying Tournament in December of 2011. Today, Lizette is a well respected, world-class golfer. Currently in her second year as an LPGA Tour Player, Lizette has recorded top ten finishes in four tournaments this season including a second place finish at the LPGA LOTTE Championship setting a course record on April 21, 2013.

While much is expected from USC’s only four-time All-American, no one sets the bar higher for herself than she. Salas, a two time Pac-10 Player of the Year (2009, 2011), busted through every obstacle placed on her path to reach the heights of an LPGA Tour Player. The youngest daughter of immigrants from Mexico, Lizette’s rise to prominence in the world of golf is a major source of pride for her family. She was introduced to golf at the age of seven by her father who has been a mechanic at the Azusa Greens public golf course for 33 years. He bartered his talents as a mechanic for golf lessons from the local PGA pro for his three children.

It didn’t take long for her family to recognize Lizette’s talents on the golf course and by the age of 15 she recorded a 62 in a junior tournament. Suddenly, everyone was focused on Lizette Salas; and this time for the right reasons. “I felt like the weird flower out on the golf course,” recalls Salas of her days as a Junior Golfer. “At first, it was really intimidating because I was the only Latina. My parents helped me through that. They encouraged me to do my best and focus on golf. I got used to the fact that there aren’t too many Latinos out there.” She became driven to succeed and determined to shine a positive light on her community, “I’m from a city that’s predominantly Hispanic. I want to be a positive role-model for the girls in my community and change the stereotypes placed on Hispanics. I want to show that a Mexican-American can play golf professionally and I want my peers to see that if I can do it, then they can do anything if they just work at it.”

And work hard she did. Since high school, Lizette knew she wanted to be an LPGA Tour Player. She also knew that to be a role-model for her community, she would have to graduate from college and resist the temptation to go professional straight out of high school as so many others have done. Salas excelled academically as she continued to make her mark in Junior Golf by winning championships. Soon, various universities were courting her. Lizette chose to attend USC, “This was one of the best decisions I ever made in my life. My experience at USC was priceless. I just love USC! And USC loved Lizette too and they asked her to be a featured speaker at the graduation ceremony for her fellow student-athlete graduates where she delivered a moving and heart-felt speech.

Nominated by Toyota and Conill