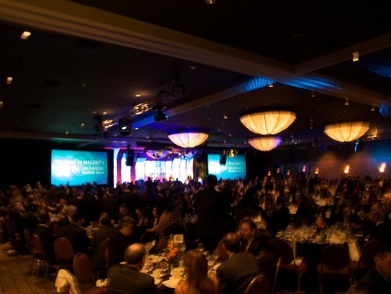 In this edition, we take our cameras to a fundraising gala and profile a small business owner.

Social Recognition, marinated with a little salsa are featured in this edition of Hispanic Lifestyle.
Segment 1: MALDEF
For 35 Years the Mexican American Legal Defense Fund (MALDEF) has honored individuals that have promoted their cause of bringing Latinos into the mainstream of American political and socio-economic life; providing better educational opportunities; encouraging participation in all aspects of society; and offering a positive vision for the future.

Our coverage at the gala began with meeting the organizations new President and General Counsel Thomas Saenz. Thomas began our conversation by describing the mission of MALDEF.

We ended our conversation with Thomas by asking about the evenings honorees.

Segment 2
We move on to Manny Medrano a reporter for KTLA News in Los Angeles, and a former Supreme Court and Legal Affairs correspondent for ABC News in Washington, DC.
Mr. Medrano spoke about why he attended and supports MALDEF.

Segment 3
Attending the event was newly appointed Los Angeles Chief-of-Polilce Charlie Beck. We spoke with Chief Beck just days before being sworn in to oversee the third largest police department in the United States. Chief Beck spoke about the pace of his life since since his nomination.

We ended our conversation with Chief Beck by asking for his thoughts on MALDEF.

Segment 4
We move on to veteran Segmentor and Master Teacher Pepe Serna. Mr. Serna has appeared in more than 100 feature films and 300 television shows and is currently working on his one-man show “El Ruco, Chuco, Cholo, Pachuco.”

Pepe spoke about his support for MALDEF.

Segment 5
We met up with Five time Emmy award winning journalist, producer, film maker and Latin media and marketing entrepreneur, Giselle Fernandez. Ms. Fernandez is the President of the first Latina owned Hispanic themed media and management company in Hollywood, F Squared, and Flamenco Inc. We asked Giselle to tell us why with her busy schedule she accepted the responsibility of Mistress of Ceremonies for the evening.

Segment 6
Our final conversation of the evening was with Gloria Molina who became the first Latina ever elected to the Los Angeles County Board of Supervisors. We asked the supervisor about the current state of latinos?
http://www.maldef.org/

For several years there was another restaurant at this location. We asked Jesse about remodeling process to accommodate his vision.

Jesse explains how he developed the menu for Yxta.

Since the economy has been difficult for any small business we asked Jesse how his business is doing.

Jesse goes on to explain why he chose the corner of Central Avenue and 6th Street in Los Angeles to start his restaurant.