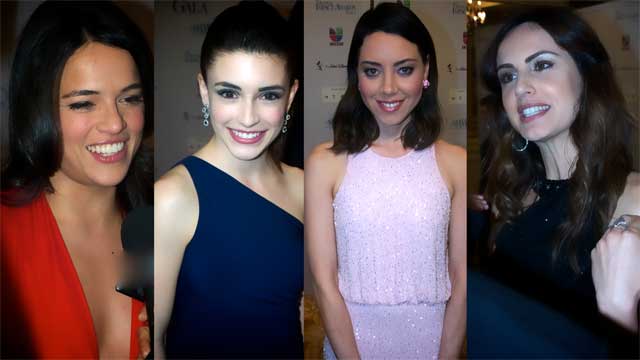 Notes and Links to Episode #183

In this edition of Hispanic Lifestyle: We highlight Latino image in the media . . . Catch up with friends . . .  and talk international trade.

Latino Image and business are the focus of this this edition of Hispanic Lifestyle.

The National Hispanic Media Coalition educates and influences media corporations on the importance of including U.S. Latinos at all levels of employment. It challenges media that carelessly exploit negative Latino stereotypes. Hispanic Lifestyle was on the red carpet of their Annual Impact Awards Gala which recognizes outstanding contributions to the positive portrayal of Latinos in media.

We asked their President & CEO Mr. Alex Nogales if he would sum up the organizations activities for the year.

Sharing the hosting duties for the evening was actress Claudia Bassols. She spoke with us about her career and the experience of working on the CBS comedy Rob!

Awake is one of favorite new shows of the season, I asked Daniela to talk about the show format.

Next we caught up with actress Lisa Vidal who spoke with Hispanic Lifestyle about the impending union merger.

Over the years I have seen Kikey represent others and volunteer her time for important causes. I asked if she would talk about her upcoming projects.

Cheech went on to talk about life as a working actor.

I asked Cesar to describe how the dog whisper developed from a concept to a top rated television program.

Chris gave his reaction to actor, producer George Clooney commenting how much he enjoyed the film “A Better Life”

Over the years Hot Tamales Live has featured actors that have went on to huge professional success.  Kiki took the opportunity names some of those performers.

Efren Ramirez played the role of “Pedro” in the movie Napoleon Dynamite. The film has went on become part of scultural folklore. Efren spoke about the experience that changed his life.

Actress Michelle Rodriguez stopped by to comment on her receiving recognition from NHMC.

Rob! was not picked up by CBS

Awake featuring Daniela, was not renewed by NBC

The merger between the The Screen Actors Guild and the American Federation of Television and Radio Artists  passed. The two unions have a combined union now represents more than 150,000 members.

Under Secretary of Commerce for International Trade

Hispanic Lifestyle spoke with Under Secretary of Commerce for International Trade Francisco Sánchez, who was appointed by President Obama and unanimously confirmed by the United State Senate. I started our conversation with Under Secretary by asking if he would rate his departments performance to date.

Under Secretary Sanchez spoke about the specific duties of his department.

We asked the Under secretary spoke to talk about the types of businesses taking advantage of export opportunities.

We finished our conversation with Under secretary Sanchez by asking about how average businesses utilizes the service of US Department of Commerce.