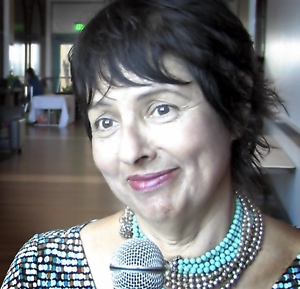 Nancy was born and raised in Chicago, the daughter of Mexican American parents who moved to the big city from Texas. This “Chicana from Chicago” grew up on the city’s south side, known for its stockyards, steel mills, and tough politics. She has enjoyed working with the written word since her 4th grade composition was selected to be read at a school assembly. “What My Mother Means To Me,” became her early springboard to working in television and film. Nancy received her degree in Radio, Television, and Film from the University of Texas at Austin. She holds a graduate degree from the University of Michigan at Ann Arbor, in Communications.

She is the Associate Producer on the feature films Selena starring Jennifer Lopez and Edward James Olmos, and My Family Mi Familia,starring Jimmy Smits.
She’s one of the writers on this year’s Love, Loss, and What I Wore, a theatre production by Nora Ephron and Delia Ephron. For more information: http://www.lovelossonstage.com The play received the 2010 Drama Desk Award for Unique Theatrical Experience.

Martinez began her banking career in 1992 as a teller in San Francisco. Throughout her career, Martinez has worked in a number of retail banking positions including personal banker, assistant manager, store manager, and sales development consultant. She also has extensive wealth management experience, and holds securities licenses (Series 7 & 24), obtained during her five years at Citibank prior to joining Wells Fargo.