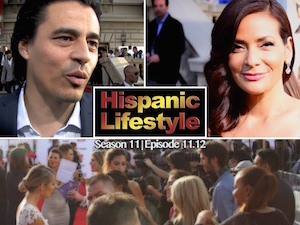 In this edition of Hispanic Lifestyle we talk social media with actor Antonio Jaramillo and actress Constance Marie on the red carpet at the 2014 Alma Awards.

About the Actors
Antonio Jaramillo did not know he would become an Actor. Having had a difficult childhood, pursuing an acting career was an unlikely choice. Lucky for us, his path led him to the stage and since arriving in Hollywood in 2004 this tall, sexy and handsome actor has been turning in stellar performances.

Thus far, Antonio has managed to move with ease from stage to television to film. In 2012 Antonio portrayed the trustworthy accountant and negotiator for the cartel in Oliver Stone’s “Savages” alongside Hollywood Stars Benicio Del Toro, Salma Hayek and Damian Bichir. Previously Antonio appeared on the big screen with Andy Garcia, Ray Liotta, Esai Morales and Danny Trejo in the celebrated Indie Drama “The Line”. On Televison Antonio has Guest-starred in some of America’s favorite shows including “The

Constance Marie is most known for her role as the hard hard-working and devoted wife, Angie, in The George Lopez Show. For this beloved role, The Imagen Awards honored her with a “Best Actress in a TV series” award and a nomination for “Best Actress in a Comedy Series.”

In her personal life, Constance recently welcomed her first child into the world, Luna Marie Katich. Constance has been candid about the difficulties she faced trying to get pregnant before eventually turning to IVF. She is determined to reach out to women in similar situations, and is proud to let them know that they are not alone. In addition to being extremely knowledgeable about pregnancy wellness, Constance is a vegetarian and organic follower. She also practices a “green” lifestyle and is knowledgeable about “green” living. For instance, Constance decorated Luna’s nursery with completely organic and non-toxic materials. From the paint to the furniture and carpeting, Constance made sure that the room was safe for her baby and for the environment.