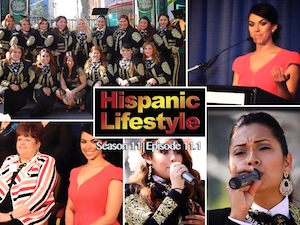 Our interview with Amy took place right after our 2014 Latina Conference featuring our Latinas of Influence.  Amy Diaz of Providence, Rhode Island is the former Miss Earth United States 2009, Miss Rhode Island USA 2008 and Miss Rhode Island Teen USA 2001, is a proud 2001 graduate of Classical High School. At the age of 19, Amy graduated cum laude with a Bachelor of Arts in Broadcast Communication with a Minor in Psychology from Barry University. In May of 2007 at 22 years old, Amy completed dual Master degrees in Business Administration and Sport Management. She is a nationally recognized President and Founding Sister of the Iota Theta Chapter of Phi Sigma Sigma Sorority and was the recipient of several leadership awards.

Exclusive photos from our 2014 Latina Conference.

In our second segment we talks with Cindy Shea the founder of the Mariachi Divas about their recent Grammy nomination and the longterm success of the group.

Mariachi Divas first GRAMMY Award was in 2009 for Best Regional Mexican Album of the year for their release of Canciones De Amor. This marked the first time in the history of the National Academy of Recording Arts and Sciences that an all-female mariachi group had been a nominee and a winner. Other GRAMMY nominations include: