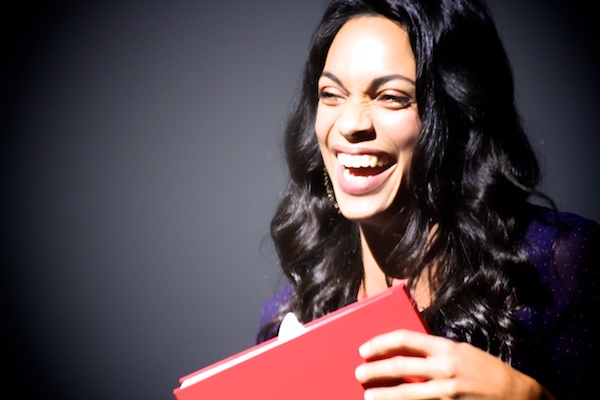 About the video interview . . .  Hispanic Lifestyle spoke with Ms. Dawson at the presentation of Toyota’s the Book of Names event in Hollywood, California.  Rosario spoke about her “WRAPED BLACK” Toyota Prius and landing the role of Bat Girl/Barbara Gordon in the 2017 LEGO Batman Movie.

Rosario Dawson has garnered praise for her numerous collaborations with top actors and directors, making her one of Hollywood’s most sought-after leading ladies. In addition to her work as a successful film and television actress, Dawson is an activist lending her time to a range of influential organizations, most notably Voto Latino, which she co-founded in 2004 to help empower Latino millennials to vote and influence change in government. She also recently co-founded, alongside Abrima Erwiah, Studio One Eighty Nine, a social enterprise composed of creatives seeking to provide a platform to help promote and curate African and African-inspired content through an e-commerce shopping site, a supporting agency and an artisan-produced fashion collection called Fashion Rising Collection.

Dawson is set to star in THE LEGO BATMAN MOVIE as the voice of Barbara Gordon/Batgirl alongside Will Arnett, Zach Galifianakis, Michael Cera and Ralph Fiennes. THE LEGO BATMAN MOVIE is due to be released on February 10th, 2017. Dawson will also soon be seen in director Denis DiNovi’s thriller, UNFORGETTABLE, opposite Katherine Heigl, for Warner Bros set for release on April 21st, 2017.

Dawson is currently in production on Marvel’s “The Defenders” and “Iron Fist”, reprising her role as ‘Claire Temple’. Both series will stream on Netflix in 2017. She most recently appeared in Netflix’s Marvel series “Luke Cage”, which premiered on Netflix in September of this year, and “Daredevil”, which premiered its second season last March. All of these series are modern day adaptations of the popular Marvel comics.

In 2014, Dawson was seen in the Scott Rudin-produced TOP FIVE, directed by Chris Rock. Dawson plays a New York journalist tasked with profiling a famous stand-up comedian turned serious actor (Rock). The film premiered at the 2014 Toronto International Film Festival to rave reviews and was subsequently purchased by Paramount Pictures in what became the largest sale of the festival. The film was released theatrically in 2014 to critical acclaim, with Dawson earning a Critics Choice Award nomination in the category of “Best Actress in a Comedy”. Earlier that year, Dawson reprised her role in the sequel SIN CITY: A DAME TO KILL FOR alongside Jessica Alba, Joseph Gordon-Levitt and Bruce Willis, and also starred alongside Michael Peña and America Ferrera in Diego Luna’s CESAR CHAVEZ, a biopic about the civil-rights activist and labor organizer.

Other film credits include ZOOKEEPER, opposite Kevin James; Danny Boyle’s thriller TRANCE, opposite James McAvoy and Vincent Cassel; Tony Scott’s UNSTOPPABLE, alongside Denzel Washington and Chris Pine; EAGLE EYE, opposite Billy Bob Thornton and Shia LaBeouf; EXPLICIT ILLS, which premiered at the South by Southwest Film Festival and won an Audience Award; Quentin Tarantino’s GRINDHOUSE with Kurt Russell; DESCENT, her first self-produced feature film under production banner Trybe Films; CLERKS 2 opposite Kevin Smith; Dito Montiel’s A GUIDE TO REORGANIZING YOUR SAINTS opposite Robert Downey Jr., Dianne Wiest and Channing Tatum; Oliver Stone’s ALEXANDER with Colin Farrell and Angelina Jolie; THE RUNDOWN, alongside Dwayne Johnson and Christopher Walken; JOSIE AND THE PUSSYCATS, with Rachel Leigh Cook and Tara Reid; as well as the Spike Lee films HE GOT GAME with Denzel Washington, and THE 25th HOUR opposite Edward Norton.

Dawson’s film career began at the age of 15 when she filmed the critically acclaimed indie drama KIDS, directed by Larry Clark. She later went on to star in MEN IN BLACK II opposite Will Smith and Tommy Lee Jones in 2002, and soon after also earned critical success with portraying Mimi Marquez in RENT, a big-screen adaptation of the acclaimed Broadway play that co- starred original cast members Anthony Rapp, Adam Pascal, Jesse Martin and Taye Diggs, for which she received the ShoWest Award for Supporting Actress of the Year. For her performance in Gabriele Muccino’s SEVEN POUNDS, co-starring Will Smith, Dawson won the Best Actress in a Motion Picture Award at the 2009 NAACP Image Awards. For her television debut, Dawson starred in the Lifetime original movie, “Project Five”, which sewed together five personal narratives depicting the effects of breast cancer through survivor stories. Under Alicia Keys’ direction, Dawson was nominated for a 2012 NAACPT Image Award nomination for her performance.

Dawson is also an active member of V-Day, an organization founded by Eve Ensler to help stop violence against women, and the Environmental Media Association, amongst others. She was also honored with the President’s Volunteer Service Award for her valuable contributions to the community.

Dawson resides in both Los Angeles and New York