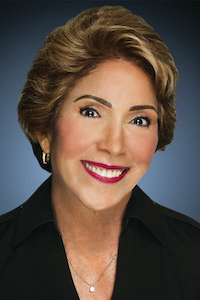 Marty Rodriguez has a simple business philosophy: To bring happiness to herself and to others by being the best example that she can be; to inspire and change lives; and, to bring out the best in the people whose lives she touches.

ABOUT THE VIDEO INTERVIEW | Ms. Rodriguez talks about selling in during good times and bad and the passion that drives to success.  Thank you to the Los Angeles Chapter of the National Latina Business Women’s Association who recognized Marty in 2016.

That philosophy can be seen every day in the “Rules of the Road” that is clearly posted for all to see. For Marty, a 39-year veteran of the real estate industry, these words are more than just a motto – they literally define the way she lives. And because she takes these words to heart, living by them has resulted in achieving a level of success that only a select few can claim.

Growing up in El Monte – in a two-bedroom home with a single bathroom – the children attended school and worked with their parents whenever possible, cleaning houses, cleaning walnuts, taking in ironing, or by doing other odd jobs.

Rather than allowing circumstances to limit their expectations, Marty’s parents, Felix and Rosalina Castruita, encouraged their children – all 11 of them – to settle for absolutely nothing less than the best.

Marty’s first job in real estate sales was in partnership with another agent at a CENTURY 21® office. And if there were ever any question as to whether or not Marty had chosen the right path, the achievement of $1 million in sales during that first year erased any chance for doubt.

Marty more than survived the tumultuous market of the late 80s and early 90s: she thrived. She sped past the $10 million in sales volume achieved in 1986, earned more than $500,000 in closed commissions in 1988, and was bestowed double honors by the CENTURY 21 System in 1991: she was named World Sales Champion and inducted in to the Century 21 International Hall of Fame.

Building on her success, Marty continued to receive accolade after accolade, earning World Sales Champion in 1991, 1992 and 1993, making her the first in the history of the Century 21 System to receive that honor for three consecutive years. She would again be ranked number one in the world in 1997.

With close to 20 years of record breaking accomplishments under her belt, she opened the doors to Century 21 Marty Rodriguez in 1996. Over the years the office has grown to include 20 agents and a support staff of 14. Sales records continue to fall.

It would be hard to enjoy this level of professional success without having at least some semblance of balance in her family life. Marty has gone a step further, and firmly believes that children should not only share in, but should learn to appreciate the work their parents are dedicated to.

Three of the four children that Marty and husband Ed have raised have pivotal positions in the agency, with daughter Shelley, a USC Marshall School of Business graduate, at the helm as Broker and business manager; stepson Ed, III., is the sales manager. And son Sean is the brain behind the agency’s computer system and Internet presence. He also helped his father expand the agency’s office into an 11,000 square foot complex owned by Marty and Ed.

The honors are too numerous to mention, but today Marty is the embodiment of personal and professional success, for her clients, her team and for industry contemporaries. Her tenacity and tireless devotion to the work that she loves, balanced with a genuine concern to the needs of her clients makes Marty Rodriguez the logical choice for meeting all of your real estate needs.

Marty’s Resume
I have been selling residential real estate in Southern California for the CENTURY 21® System for the past 39 years. Over those years, I have compiled an incredible real estate sales record for the System, both Nationally and Worldwide. I have been recognized by the CENTURY 21 System as the most successful real estate agent in the history of the franchise.

Marty and the “Team That Delivers The Dream” have sold over 3.5 Billion Dollars in real estate and have been ranked as the #1 CENTURY 21 Team in the nation for 20 years and #1 in the worldwide CENTURY 21 System six times.

My experience and unrivaled industry knowledge give me the advantage to advertise and move real estate listings in any market. My devotion and genuine concern allows me to create and maintain a personal relationship with my clients. My drive, motivation and leadership skills have allowed me to achieve a level of success that few can achieve. You can trust me to provide unmatched service in meeting and exceeding all your real estate needs.

Nomination submitted by past 2016 Latina of Influence Rose Elena Sauceda