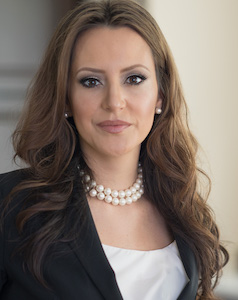 Hispanic Lifestyle is pleased to recognize Vice President of PR and Marketing for ALMACO Group, a European shipbuilding multinational company Ana M. Albertas as a 2017 Latina of Influence. Ms. Albert along with our entire list of 2017 Latinas of Influence are invited to participate in Hispanic Lifestyle’s 2017 Latina Conference taking place April 5 – 6, 2017 in Ontario, California.

Ana Larrea-Albert is Vice President of PR and Marketing for ALMACO Group, a European shipbuilding multinational company. Previously, while working in the dental division of the $2-billion medical device firm Zimmer Biomet, she was named Marketer of the Year in 2011 for her Latin American initiatives. Ana also was Operations Coordinator for a French importer and exporter, and held financial roles for Morgan Stanley, Bank of America, Mori Lee and Jewelers International Showcase.

Ana received her MBA from Florida Atlantic University in Boca Raton, where she specialized in international business and where she also earned her undergraduate degree in marketing. Born in Quito, Ecuador, Ana speaks Spanish, English and French fluently. She studied international relations at the Universidad San Francisco de Quito in Quito, Ecuador, and French at La Sorbonne in Paris, France.

Ana has researched women in the maritime industry and international business since 2013, earning academic and industry accolades for her work, including presenting in national universities and at the World Maritime University, the graduate school of the United Nation’s International Maritime Organization, in Malmo, Sweden, at the Women’s Global Leadership Conference. Ana also published a book in 2015, “Doing Business in India, Harnessing Potential,” based on her award-winning research.

Ana is currently a Think Freely Latino (TFL) Advisory Board member, a new U.S. Hispanic and Latino outreach project focused on Latino empowerment. She served as a Board Member and Marketing Vice President of the Association of Latino Professionals for America’s (ALPFA) Miami chapter from 2015 through 2016, as well as the Volunteer Marketing Director of ALPFA nationally during 2016. Ana chaired the Marketing Committee for the Women’s International Shipping and Trading Association (WISTA) USA’s chapter during 2015.

Ana is the Founder and President of the Latina leadership platform NENANI.com, which she established in 2010 as a marketing consulting firm. After years of helping her customers with their online and event presence, Ana reinvented NENANI in late 2015 as a platform to showcase the talent and contributions of Latin women. Through the NENANI mentoring program, Ana offers to high school and college Latinas opportunities to boost leadership, personal branding and networking skills.

She lives in Wellington, Florida, with her husband, 14-year-old son and adorable Boston Terrier.