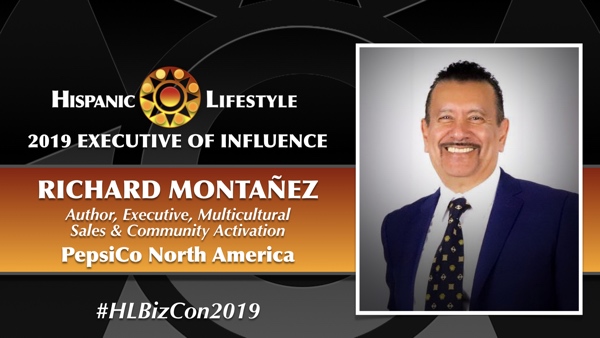 Hispanic Lifestyle is pleased to recognize Richard Montañez, Author,  Executive, Multicultural Sales & Community Activation PepsiCo North America as a 2019 Executive of Influence. Richard will be recognized along with his fellow honorees at BizCon 2019 during our lunchtime program on June 12, 2019 at the Ontario Airport Hotel and Conference Center, Ontario California.

Richard Montañez is Vice President of Multicultural Sales & Community Promotions across PepsiCo’s North American divisions, leveraging best practices internally and externally to develop community partnerships. Throughout his career Richard has worked in various assignments and roles across all PepsiCo division and functions.

Richard started his PepsiCo career at Frito-Lay in 1976 as a janitor in its Rancho Cucamonga plant. He is recognized as the creator of the Flamin’ hot line of products including Flamin’ Hot Cheetos, which influenced future ethnic products and the first Frito-Lay Hispanic marketing team. In 1990 Richard helped write and launch the Continuous Improvement Initiative. He was instrumental in creating the first operation cost improvement team. In addition, Richard helped influence Hispanic products and marketing promotions for KFC and Taco Bell.

Richard is known for his visionary leadership and ability to develop new systems and products. He sits on numerous non-profit boards, and was appointed to serve on the California State Workforce Investment Board. He was recruited to the state board for his business experience in creating jobs and building training systems.

Throughout his career, Richard has accomplished several notable achievements and awards. Both state and federal government officials have honored Richard with numerous commendations for his work around education and leading economic growth. He was recognized by Hispanic Lifestyle magazine as one of the most influential Hispanics in corporate America, has been featured in Newsweek and Fortune 500 magazine.

He has been invited by the White House numerous times including the welcoming of Pope Benedict XVI White House visit. In 2004 Richard presented at a special United Nations event.

Richard and Judy Montañez have been married for more than 30 years and live in Rancho Cucamonga. He is a father of three sons and has four grandchildren.