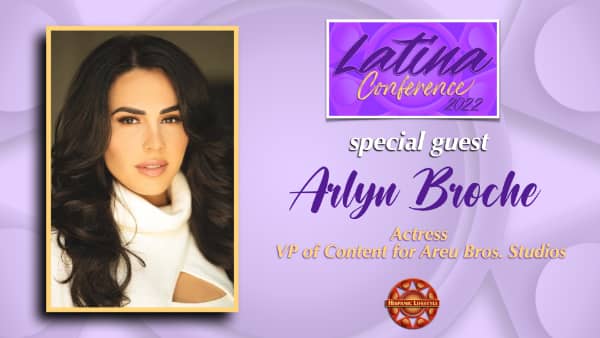 Breakout star and stunning Cuban beauty Arlyn Broche will take Hollywood by storm in the highly anticipated Season 2 of NBC’s “Young Rock,” premiering March 15th. Broche has been penned for 6 of the 12 episodes in the season, starring as Dany Garcia, the woman behind the iconic Dwayne “The Rock” Johnson. Audiences will recognize Arlyn from her role in Season 2 of HBO’s “Ballers” also alongside Dwayne Johnson.

Dubbed “La Broche,” by her Latin following, she is quickly becoming the newest Latina to take over Hollywood. Both on and off the screen, she is representing Latinas everywhere as the new VP of Content for Areu Bros. Studios, the largest Latin studio in the United States.

One thing is for certain, Arlyn Broche has a bright future ahead and exciting projects planned for 2022.

As the daughter of Cuban immigrants, the Miami native had acting in her blood, quite literally. Her father was a very successful television, film and theatre actor in Cuba, Arlyn was destined to follow in his footsteps and from an early age envisioned herself to become a successful Hollywood actress. For political reasons the family had to flee the country in the Mariel boat lift with Arlyn’s two older siblings.

A gifted and creative child, at 9 years old, she was cast as Shakespeare’s ‘Juliet,’ later chosen to recite Jose Marti’s famous poem ‘Cultivo una Rosa Blanca’ at a Spanish Heritage Festival and subsequently cast in different roles, none too small, so long as they allowed her the opportunity to continue to express her passion for the arts. Arlyn went on to play different roles in her personal and professional life, including the role of young wife, mother of three kids and entrepreneur.

After graduating from G Holmes Braddock High School, she went on to attend Florida International University to major in business. Simultaneously, she was managing a family bakery with her high school sweetheart turned husband and gave birth to her first child. The young wife and mother at only 19-years-old proved she could handle lots of responsibility. One thing led to another and she decided to change her major to health care administration, and became the sole owner and administrator of a health care company. But, no matter what life threw at Arlyn, she never abandoned her dream of pursuing a career as an actress.

Even while managing her business, she auditioned and was accepted into the FIU Theatre program, while also being mentored and trained privately by Crystina Wyler, Lori Wyman, Marc Macauley, Marjorie W. Morhaim and Jeanett Hopkins, among others.

When she isn’t on set or at an audition, Arlyn loves spending time with her husband, Osvaldo and their three children: Victoria, Justin and Sophia.