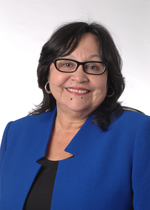 CTA Vice-President Dr. Theresa Montaño began her teaching career as a middle school paraeducator in northeast Los Angeles. She later became a middle and high school social studies classroom teacher and taught for 15 years in Los Angeles, California and Denver, Colorado. She helped establish a program for teachers interested in securing their National Board certification and secure a stipend and retirement benefits for those teachers. In partnership with LAUSD, she developed a program and curriculum for Dial-a-Teacher, Multilingual Teacher Academies, New Teacher Academy and SB 1969/CLAD certification. As a member of United Teachers Los Angeles (UTLA), she also served on the Board of Directors, House of Representatives and CTA State Council. An active unionist, Montaño was also on the staff of UTLA, where she worked in professional development and as an area representative for nine years. She was the first coordinator of the Helen Bernstein Professional Development Center.

Her years of experience as a middle and high school teacher in Los Angeles, coupled with more than decade in higher education, gives her a special understanding of issues facing educators in California’s public schools.

Montaño’s research interests include: teacher activism; Chicana/o and Latino/a educational equity; critical multicultural education; and Bilingual/ELL education. Her publications include two co edited books, Transforming Practices in Urban Education with William DelaTorre and Jacqueline Hughes and Assault on Kids: How Hyperaccountability, Corporatization and Deficit Ideologies are Destroying Our Schools with Roberta Ahlquist and Paul Gorski. She is also the author of several research publications, essays and curriculum units.

Theresa is committed to building and maintaining a strong CTA, because it is essential not only to the survival of public education but to the advancement of the entire labor movement. As such, Montaño seeks greater collaboration between CTA, other labor unions and ethnic minority communities in areas of mutual concern such as privatization, fair taxation and access to education, health care and social services.

She previously served for six years as an NEA Board of Director, a member of NEA’s English Language Learners Culture and Equity Program, and as the president of the National Council for Higher Education. She has also served as president of educational rights organizations such as the National Association for Multicultural Education and the California Association of Mexican-American Educators.

Montaño lives in Los Angeles with her husband, Terry and her dog, Diego.

Nominated by ​Julius B. Thomas​