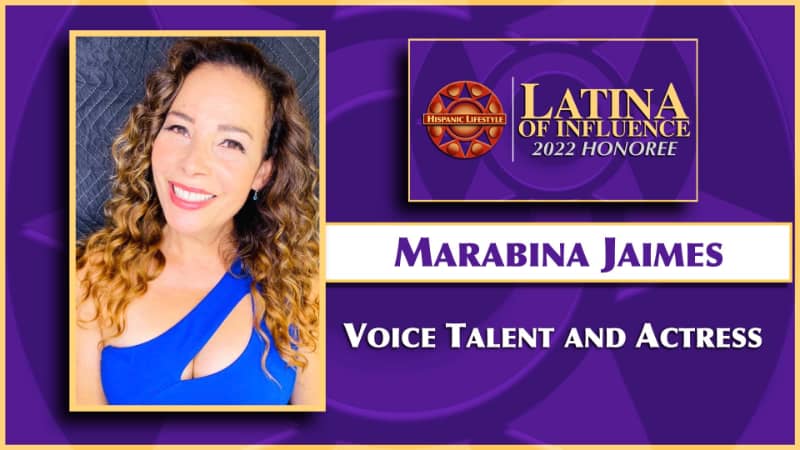 We are pleased to announce Stage, Film, and Television Actress, Bilingual Voice Talent, Singer, and Producer, Marabina Jaimes was announced as a Hispanic Lifestyle 2022 Latina of Influence. Our entire 2022 Latinas of Influence listing can be found, @ https://bit.ly/3rp7OyG

Best known as “Mara” the Emmy Award Winning Host of PBS “Storytime”. Other credits include Carmen in Klasky- Csupo’s “Santo Bugito” (CBS), the principal subject in the documentary “Now En Espanol” (PBS), SMILF, Criminal Minds, Coco, Acapulco, and has shot several episodes of the soon to be released Bosch: Legacy. 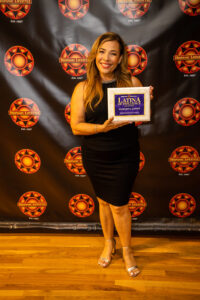 On stage she has worked with legendary Latino directors Luis Valdez, (Bandido!) Jose Luis Valenzuela, and Jaime Jaimes (RIP – whom she was married to for 13 years, winning several theater awards under his direction). She also toured for 10 years with the late Luis Avalos’ Holiday Classic, Paquito’s Christmas, reaching the
Kennedy Center Stage.

Marabina is very passionate about her heritage (Mexi-Rican, born in the exotic town of Glendale, California) and of being bilingual. During the 2020 Pandemic, she was invited by producer Dantonio Alvarez (All Rise) and his father Tito Alvarez (the Spanish Voice of Coca Cola and Darth Vader) to create the curriculum and virtual platform for www.AcadmiaDeLaVoz.com, the only Bilingual Virtual Voice Over Academy lead by an Emmy Award Winning Latina. As CEO, she’s proud to share her more than 25 years of Hollywood experience with her students as she encourages them to gain confidence in both languages in all genres of Voice Over, from Commercials to Cartoons to Audio Books to Video Games – as well as supporting the technical demands of engineering themselves, curating material for their demos, conducting private interviews with casting, prepping for auditions, and showing them how to create virtual opportunities from their own Pro Home Studios.